OK this one drove me crazy.

This should have been easy, we know that Rene Schmitz stuff sounds good (I have already built his "FEITW" ADSR) and I thought, let's try his MS20 filter. 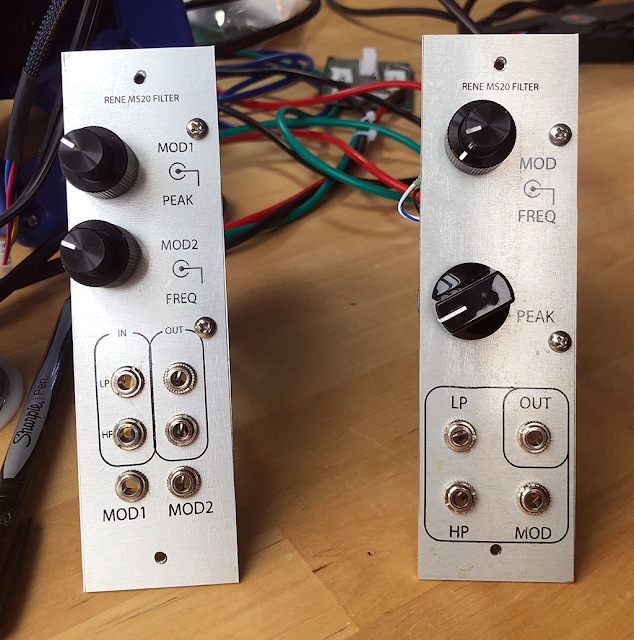 So: Did the Eagle design based on what's on Rene's site, put together a board layout, and sent off for fab. 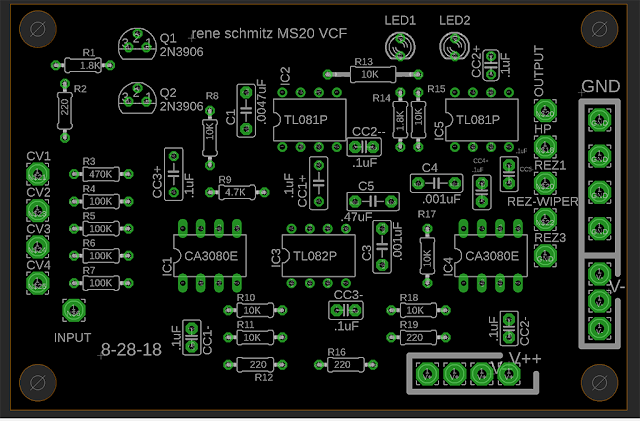 This is a pretty simple circuit and from a good looking schematic, from a smart synth DIY maven, why wouldn't it sound good?

You know how I sometimes post: worked first time?  This one most definitely didn't work first time. Neither filter worked for beans for at least 3 evenings--and the second one took me more like 5 evenings to get working. This got me to wonder, why not just buy someone else's filter design? Does a kit qualify as DIY (of course it does....but it's not enough torture for me?)


OK I built two and at first both builds passed audio but both filters sounded--wimpy. Almost like a cheap stereo tone control, not that nice fat MS20 sound with dirt when you crank up the "Peak". I know Rene's designs are high quality, and a skinny sounding filter must be on me.


After probing around a lot with my scope I ended up tracing this to a stupid mistake: I copied the schematic wrong into Eagle!  I drew up a critical voltage divider incorrectly, which was causing a journey to 6db cutoff, wimp ass sounding low pass land. But the 8-28-18 PCB is still useful, although you have to do a trace cut and some kludge wiring to get it sounding MS20-like.


With all that crappy advertising, you can get my PCB design (the one needing a trace cut, 8-28-18, and fixed yet untested version, 1-9-19) here.  My website includes BOM, wiring suggestions, and specifics about the trace fix.


Great! we get that crunchy peak sound, fat lowpass and nice Korg growl!

Next I turned my attention to the second unit (two VCFs so I can HP + LP = band pass? Two on the original MS20 right?) But even with the trace fix, the second MS20 filter had a strange problem--when I cranked the CV up the audio output went completely dead.

Damn! It took me 2 more evenings of comparing the working VCF to the broken one to figure out problem! I suspected a parts placement error, but after checking twice, no, everything is OK.  Bad IC?  No; swapped everything and no change. Could I live with a VCF just not eating any CV above about 4V DC?  No, not really.  And besides, #1 worked, so #2 needs to work the same way.

Arrg!  Too much shotgunning!

Ended up tracing this to a wiring problem with one of the grounds:


Goes like this: for an MS20 OTA filter: if you want high pass, stick audio into one end of a critical cap. If you want low pass, ground the same end of the same cap and put your signal into the circuit's main input: 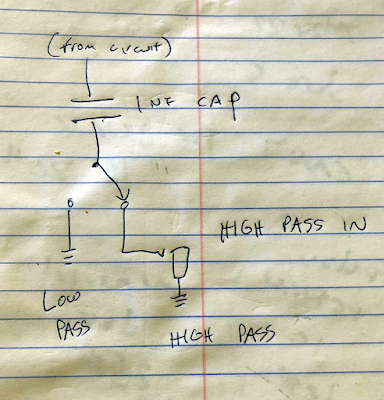 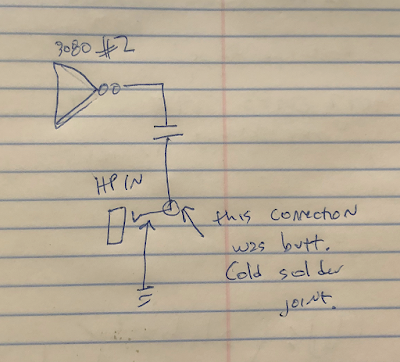 OK with all that sorted, I did a recorded the quickee demo, here.


Five evening later, I have to wonder, was all of this worth it?  There are a ton of PCB's for MS20 filters already out there, did I really have to do my own PCB? I doubt it, really. Hell, I could have just bought one of those MS20 repops, and if it went south, bug Guitar Center for help right? Maybe not?

I think I just like to torture myself, building machines that I go crazy trying to fix over the course of 5-6 evenings. Welcome to the world of DIY.


I realized something important: I hate, hate, hate haatteee it when things I build don't work. More than I should. So why DIY at all?  This is like being into sailing but hating water, right?

I'll have to ask my girlfriend, who is a mental health professional (really!) why this is, because really I have no idea. Was I dropped on my head at a young age?