There are those who think outside the box and there are others for whom there is no box at all,  gabbagabi from the EM forum is the ladder!

gabbagabi and I started corresponding after the "FAITW" posts; we are both interested in high performance EG's. In his messages, gabbagabi said he had designed a AR/ASR that attacks around 1ms and is still  musically useful. He sent me his schematic and I (embarrassed to say) couldn't figure out how it worked.

The GabbAR uses a couple of opamp stages as comparators. There is a 100nF cap in there that blips the comparator to start the attack. For me AR's were always 2 diodes, a cap and a couple of pots, and sounded like, well, an AR.

I tried putting stages of gabbagabi's design into a SIM site but the results were--inconclusive?

Gabbagabi reassured me he strip-boarded this ASR a couple of times and it worked great. We traded Eagle files; even though gabbagabi usually uses a design program called "Sprint Layout" he ported his work to Eagle, which is what I've always used. Thanks dude! Also, gabbagabi wanted to fab what he calls a "humanized" PCB, meaning that the PCB is laid out to roughly match the schematic--which takes more PCB space, but makes understanding what's going on and troubleshooting/modding a lot easier. Something I've not seen before.

I sent a gerber of his humanized design to fab along with some other things I was working on, it came back a week later, and I built the GabbAR in a couple of evenings. Guess what? gabbagabi's design works and sounds friggin' GREAT.


You can mess with C7 and the pots (use audio taper, I think it sounds better) to get sub 3ms attack and to my ears--no click.Very nice! Of course bigger caps and/or bigger pots mean longer AR times. gabigabba suggests using 100K pots and 100uF for C7 for "normal" AR speed, or 1M/2uF for very fast AR.  For me, I ended up putting 10uF and 100uF caps for C7 on a switch and using 12mm 100K audio tapers. So: If you build this AR, you may want to mess with the values for C7 and the A and R pots.

One gotcha: make sure the transistors used for T2 and T3 match the schematic.  Depending on what you use, you may have issues. I used a 2N3906 which was silk screened correctly on the PCB but had to flip a 2N3904 to get this to work. Follow the BOM, bottom of this section..... 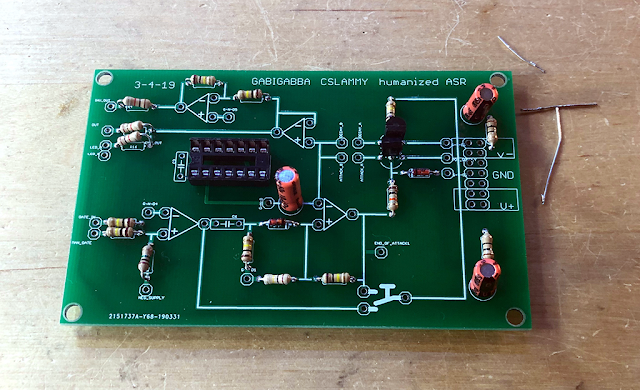 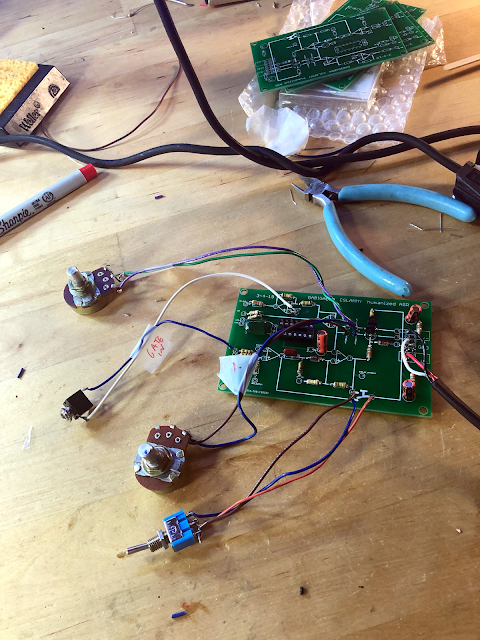 Once I had this EG up and running I tried to figure out how it works, for anyone truly interested please read my explanation docx here. I'm not an EE so please, feel free to comment or message me if you have other ideas about how this board works--it's tricky.

You can get the PCB and the usual downloadable dookie (BOM, gerber, etc) here.


Going Forward: gabbagabi and I have been IMing again; it'd be nice to shrink this design so 2x or 4x  fit in a single board and (am I really saying this?) see if I can get this shoehorned into the smaller Eurorack format.

But that's for another post. In the meantime it was super fun working with gabbagabi on this. I hope to post more of his stuff down the road. So until next post--go ahead, take a whiff, it's June!