This is the third entry about building a so called "Synth DVM".  If you are interested in the last 2 posts about this, here are links to part two and part one.

OK I have a working prototype on my bench, and I am having 5 boards made up for the op amps and Nano, from EasyEDA, they should be here next week.  Assuming that works I'll get a front panel made....

In the meantime I'm trying to finish up the TFT display programming for the project.  I am using the Adafruit GFX library, discussed in part two...

For the most part once I found decent code examples the TFT coding has been pretty easy, so I made it harder on myself--I decided that in addition to a simple voltage readout I want an analog looking "VU style meter" for the DVM, that shows a needle that points to -10V, 0V, 10V and all in between.
I can see reusing this for all sorts of audioDIY since the whole voltmeter thing with Arduino seems super easy--RMS conversion for displaying AC audio levels?  Arduino driven compressors with a VU to display level reduction?  A needle to show current values when paired with an INA219 current sensor?  A thousand and one uses....

The code basics for getting an old school looking meter going isn't that hard, the first thing I had to work on was having the meter needle turn itself off before it changed to a new position with a minimum of flickering but I think I solved that.

You can get the prototype code off of my GitHub repos, but the salient code to get this working is this:

meterx is a float that senses what is being read from an analogPin. I am saving the value during each loop, and then comparing it the next iteration.  If meterx changes--blank and redraw, otherwise, leave it alone.

It works--the VU moves in concert with the read voltage, and it appears to be accurate and linear and the flicker isn't too bad (extra credit: lastState is long, not float, which improved flicker--strange, I thought that wouldn't work at all?)

Here is the problem:The needle for the meter is not a constant length as it sweeps across the TFT and it should be.

Since Y is a constant in my code above, the needle "gets longer" as it approaches the far left or right side of its trajectory.  That doesn't look analog--at all!

I sat up at 3AM trying to figure out a way around this--at each refresh, put a bitmap of a semi circle over the needle, but wouldn't that flicker (and take up a ton of memory)?

some sort of sine/cosine kungfu?

A lookup table that reduces Y value depending on "meterx" value?

All of these feel like a kludge to me.

I can't figure out an elegant way to do this--there is a "drawFastVLine" function in the GFX library, but it can only draw vertical lines of a consistent length, not one that moves on a central axis.

I have no idea about the best way to solve this. I might post it to some forums and it's time for more research.  I guess it'd be best if I could expand the C++ library for Adafruit GFX to add a method "CreateMovingLine()" or "createVisibleRadius()" or something.

How deep do I want to get into this?

Here is a quick diagram of what I am up against. Any ideas anyone? 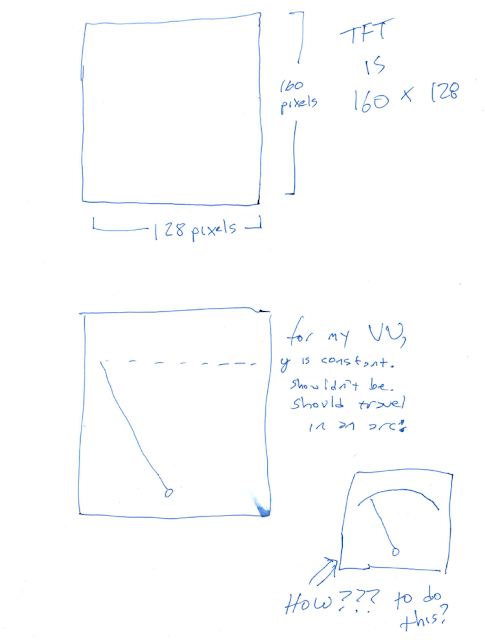 (UPDATE electro music forum user says "use an array".  Doh.  Did this and it worked.  I was not thinking about this issue simply! I'll post the results one of these days.)