Thomas Henry 13700 based VCO: All hail the mighty Henry!


How much have I learned from Thomas Henry's books?  Well it's all relative I guess, but for me,  a lot!  I went from zero knowledge about OTA's to well, some knowledge. Two of his books are both recommended if you want to learn how OTA synth circuits work: "Making music with the 3080" and "An Analog Synthesizer for the 21st century". 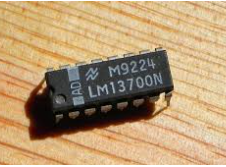 If you've studied audio DIY for synths you've probably run into these IC's before; in goes (low) voltage; out comes current, and best of all, you can control the output current in a linear fashion (hopefully) with an independent "gain" current at a dedicated input.

But it's not quite that easy:
There is really good information about all of this, that a non-EE, nearly deaf, never-made-it-as-a-rock -star guy like me can follow, in the 3080 book.

I've now built 3 TH OTA VCOs as I write this.

UPDATE!  Sound clip added. I find myself using the THVCO's a lot for FM type sounds. Because of their pure waveforms and large frequency range, they are very good for that.  Sound demo is here.

About the VCO's: The designs aren't quite as simple as the ASM VCO but yield really good looking triangle and sine as well as pulse and ramp, with good stability, a wide frequency range (putt-putt LFO to way too high for me to hear), and good V per octave performance over about 8 octaves. TH probably put a ton of work into these designs and he deserves our gratitude.

Nice to have another 3 VCO's in my rack.


I still need to do the LazerTran phony silk screen to the left two units. 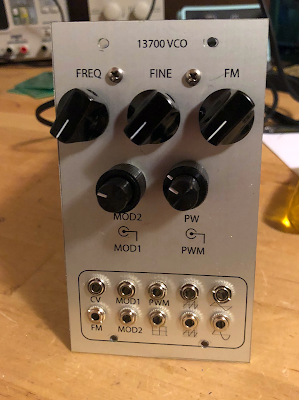 For all three: No mods really, except I had to change op amp gain at the output of the sine waves to about 4:1.  What is in TH's books come in at about 1V P/P sine for everything I built. That's too easy. Easy fix: change out a resistor value in the output buffer for sine.

BTW the waves look really good on these VCO's!

Details on the fab: There are lots of ways to build your own THVCO, including buying PCBs from  guys online (licensed sometimes, sometimes not?) who will gladly sell you THVCO inspired PCB's.

For me, I always fab my own boards (easier to mod, for one thing), but for this, a single printed circuit board using all through hole would have been huge--a lot of parts--and my Fracrak case is not that big, so I created a "motherboard" and then used 4/40 hardware to screw daughter boards (3 of them: CV volt/octave to log; OTA VCO core; waveform generation from triangle) to each one.


As always front panels are from PCBWAY (I ordered "alubase" PCBs); dual concentric pots from Small Bear; PCB's from JLCPCB. 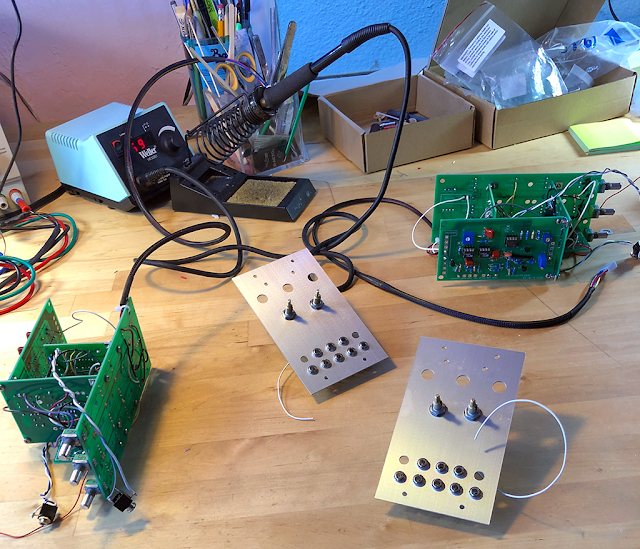 Holy smokes the 13700 VCOs were a ton of fab work. I need to get into SMTs I guess, and not do so much wiring, but I often modify my designs after they are in the rack and nothing beats through hole components and 22 gauge hook up wire to facilitate that. It took me 2 weekday evenings and 2 solid weekend days to get them stuffed, assembled, wired, debugged, calibrated, and in my rack.  Another 1/2 day to create and apply the front panel decal. 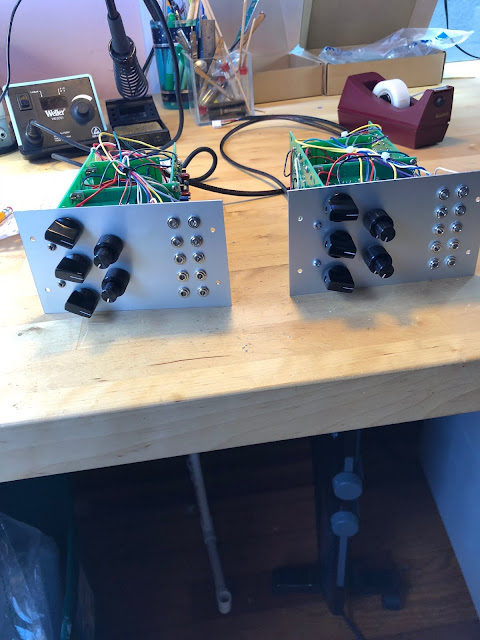 Wrap it up already! I can't in good conscience post TH's schemos anywhere, so please buy his books, but for build notes (this is mostly for me I guess....) I scanned everything I did and put it on my website here. Eagle files for the motherboard and some other goodies are linked in the same part of the page. Note there are 3 mistakes in the 13700 work, all of which are easy to fix, and the fixes are in the PDF docs. I'll go over the 3080, which is a pretty different build, and destined to be used for waveform experiments, another time. At least everything fits in my rack!