How it was back in the 80's: I'd get in my Station Wagon (or later, in a van, or a plane), get to the seedy club, and if the vibe was good, swap conversation, drinks, and, well, other things, with my new found friends.

If said friend was a fan, tour caterer, flight attendant, promoter's daughter, and/or exotic dancer and liked wire-thin synth and backup vocal dudes with Brian May hair, (a few did, most of them liked the drummer better) try even harder to swap....well, you can guess right?

My Brian May hair and Ford Country Squire are long gone. I don't drive to clubs a lot nowadays; instead I get up early and control/alt/delete a PC.....mess with Eagle and whatever audio PCB I am trying to finish, look at audio websites and peruse PDF data sheets extolling obsolete OTA IC's.

Feeling social? Not often, but if so, perhaps I will email like minded audio folks, many of whom live halfway around the world. And if the vibe is good, we swap....

(Welcome to my World.)

One such swap occurred recently with Electro-Music mensch Martijn Verhallen from reverselandfill.

Martijn and his site are chock full of creative ideas and music. To name a few: he does crazy things with video synthesis; mounts synthesizer PCBs on slabs of wood, and produces noise/dark electronic/soundscape  music.

I sent Martijn a couple of Lunetta VCO variation PCB's as well as an ASMVCO.  In trade he airmailed his "Aconitum Noise Mixer" PCB along with a CMOS based noise PCB with on-board patching called "Noise! Oscillator".

I have slim to no white/pink noise capabilities in my homemade synth so let's build the Aconitum first.


Aconitum combines a few analog staples--the "get noise out of 2 pins of a gained up transistor" and the "two inverting op amps in series mixer"--along with active filtering--a bunch of pots and jacks--into a small board.

I could build this box stock, which would be fun, but it's even more fun to mod it.

How about adding CV control of the noise levels? Why not?

There are a hundred ways to do that, an easy way: use VCA's. I have already messed around with that--the Farm VCA and Irwin VCA for instance. But, as per my initial push into DIY, I want to see if I can do something new (for me anyway). Let's try using a chip that you may have never heard of. I know I hadn't! 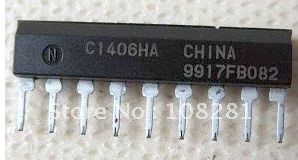 As far as I can tell, the audio consumer mass market was the C1406HA's target. Fair bet whoever designed this IC never thought it'd end up in a synth.


The C1406HA a voltage controlled stereo attenuator.  OK, the 1406 might useful for what we do, but buying these IC's was a shot in the dark--I was putting together an order for Goldmine (switches and caps) and saw this, on a lark I bought ten of them--they cost pennies--figuring, if they didn't work, toss em.


I bread boarded my first C1406HA and--viola! they are super simple and work great! The CV to audio curve, to my ears, is very musical; the distortion is there but not too bad, certainly acceptable for mixing noise and grunge.


If there is any issue at all with the C1406HA it's that its channel separation is butt--the spec sheet says 60db but really I doubt that, to me it sounds a lot worse, but for attenuating noise signals, who cares? Maybe the crappy channel sep makes the thing sound better?

I spent an evening creating an Eagle "experimenters board", which I will get fab'd soon. It will (if it works?) accommodate two 1406 chips, which allow control of 4 audio signals.


In  case you're curious: where can you buy this chip? As far as I can tell was been discontinued during the Eisenhower administration (a bit after, but close?)  Goldmine no longer has them.  Damn!  I found more in China at affordable prices--UTSOURCE in China, had them for 50 cents each USD and $4 for postage.  I have no idea if they will ever show up, much less work. But DIY is about gambling--both money and time?


UPDATE! The UTSOURCE chips showed up and appear to be just fine. The PCB I created for the C1406's works but has a lot of errors. Read Part II of this build, where the module is finished and Doris gets her oats here. Until then, don't breathe the fumes.