Now for something completely different: a repop a circuit fave of mine from 2004 or so: Harry Bissell's "Morph-lag".


Morph-what? I was initially attracted to morph-lag back in the day by its simplicity and ability to produce some interesting CV at output. So I built my first M-L back in 2005 or so using stripboard and stuffed it into a 2U frac.

I've been messing with the morph-lag ever since. 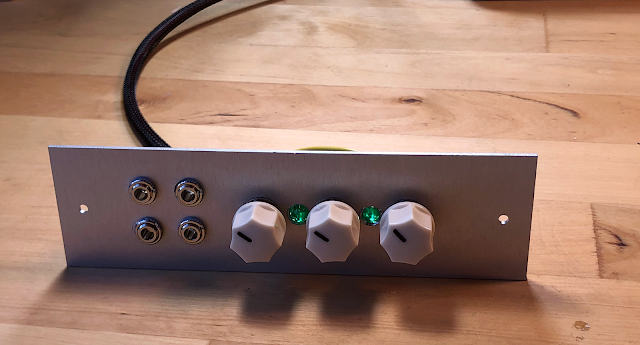 Like a lot of other circuits I fab'd back in the 2000's my original M-L is getting tired and corroded. Hey, it's 15 years later and like it or not global economy has made strip-boarding a thing of the past.
So let's get down to business and fab a new PCB for this.

I laid out the schematic in Eagle for a small/quick/easy build. Then I shipped the gerber off to China for a PCB....$2 USD before shipping for five of the damn things....wow, cheap! 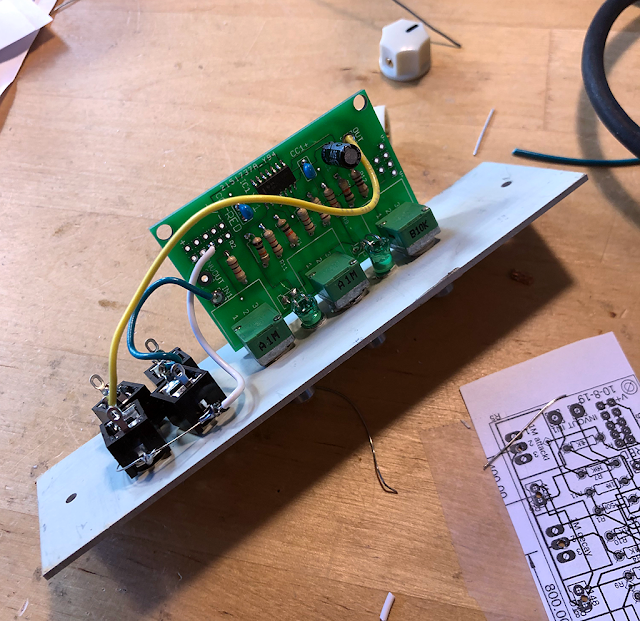 I fixed the LED issue in Eagle and created a REV2 PCB file which I will send out for fab real soon. 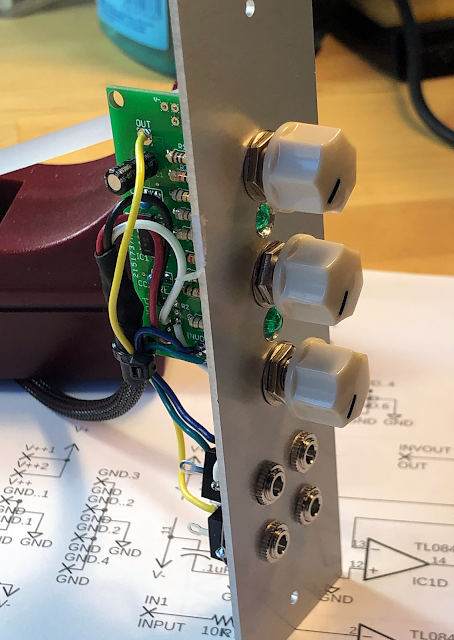 Looking at the schematic (other than using LEDs instead of diodes, what you see here is unaltered from Harry Bissell's original design): 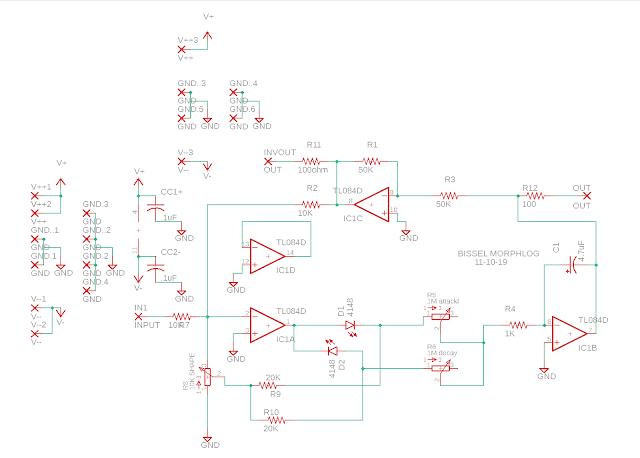 Control voltage comes in through R7 and hits IC1a, set up as a comparator.  From there D1/D2 (you can use diodes or mess with LEDs) and the 1M audio taper pots and C1 form a simple attack/release  circuit fragment.

IC1B op amp is a buffer for the A/R; the signal is inverted by IC1C, mixed back with the original signal, and fed back to IC1A's inverting input.

With R8 all the way up signals are summed and you get the source mixed with the inverted AR output fed back into IC1A. With R8 the way (towards ground) the comparator output is bled through R9 and R10, allowing more of the initial signal to get through and less of the A/R output and hence less "lag". So R8 forms a "shape" control.

The result of all this is a recursive signal mix; all sorts of variations on the original, most often with a big peak following whatever formed the signal's peak at input. Sometimes you get an exponential bang, other times, inversions mixed with the original get you back to an amplified linear response. Set shape and A and R at will; you can't go wrong, and have hours of fun....this is a simple, clever circuit. 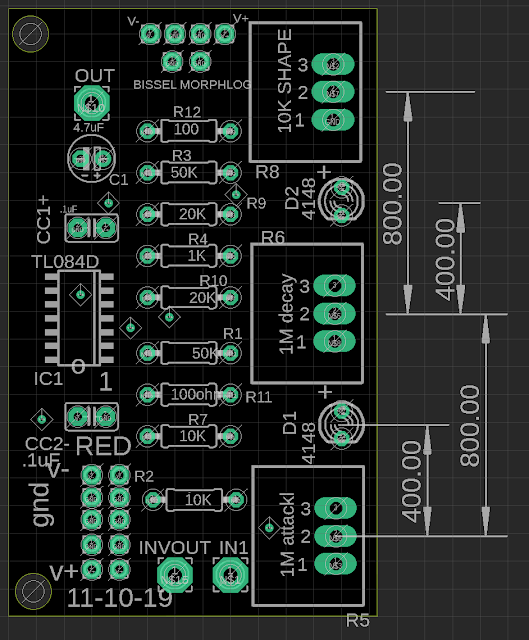 I have had best luck summing morph-lag's output with the original signal (so, mix the input signal via a CV mixer with Morph-lag's output).  To get the desired result, screw with levels. All kinds of great mod CV can be had; sum it, invert it, feed it back into itself, shape LFO's, mess with audio frequency square waves, use it to create odd slews, put the whole thing through a logic gate, whatever. I am yet to find a really bad use for a morph-lag. Glad to have a few of these in my rack to play around with.

But--what happened to Harry? I have lost touch with him and don't see him any longer on the SDIY forums. If anyone knows where he is, and think he's up for getting email, please comment below, I'd like to contact him again, he was always very helpful and enthusiastic vis a vis what we do here. And yeah, Harry's kung fu is the best! Curious what other gems he's been working on.

Also, Larry Hendry of stooge bracket/MOTM fame was a big proponent of Morph-lag but tragically Larry died in a motorcycle accident many years ago. Nevertheless as of the writing of this post larry's"wiseguy" site is still up and is a source for the original morph-lag design. I remember exchanging fun emails with Larry many years ago. He is missed.

I have drawn up a revision of morph-lag for Euro, with the Euro +/- 12V setup, there is no reason that won't work exactly the same as frac +/- 15V.  Also a REV2 of what you see here that fixes the LED screw-ups. For a future project, I may put a summer after the M-L outputs, to mix the signal back with the original CV, or maybe put some sort of attenuverter in series. I have been thinking of calling this "CVGBs", a takeoff on the legendary club from my youth that has very little to do with synthesizers. Really I don't know yet where the M-L will end up; I am still I experimenting with it (I have been for years now).

I'll keep posting and once I have some stability for the Frac and Euro designs I'll put the schems etc. on my website.