Let's get in the time machine and go back to the bad old days. I was just getting into AudioDIwhY. And I knew even less about audio electronic design and fab then than I do now.

But out of the early days of my AudioDIWHY quest came a few modules I still use today and like a lot--one which is an LFO I conjured up from different dribs and drabs I found on the web circa 2003:

I used Front Panel Express for a new front panel; easy! For the screwy switch I took a photo so as to replace it w/ correct wiring but after that the LFO didn't work; very nice. 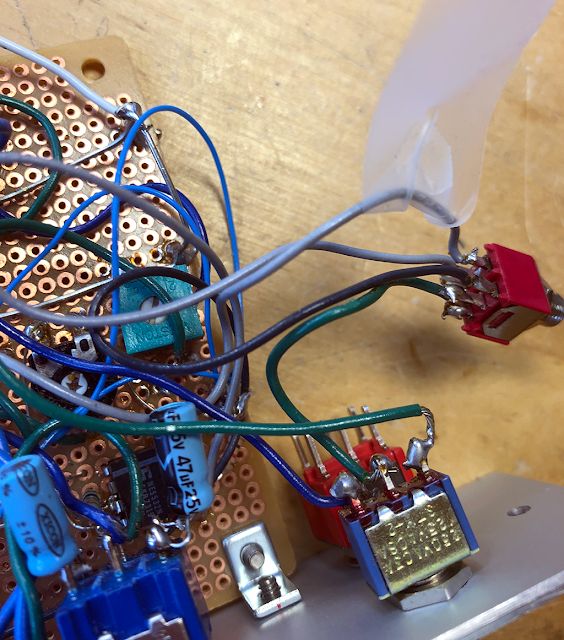 Whatever....I went to my cache of documents to find the schematic for this puppy and guess what--NO SCHEMATIC FOR THIS LFO. Very nice!
I think I remember how I built this: I found fragments of various LFO circuits on line, combined them into something that seemed at the time to make sense, and then tweaked components and values on the bench until I came up with something I liked.
Who needs a schematic?
It's helpful when the gizmo doesn't work! To fix the circuit, I had to reverse engineer the mofo; tricky because the wiring and layout on the perf was full spaghetti western. 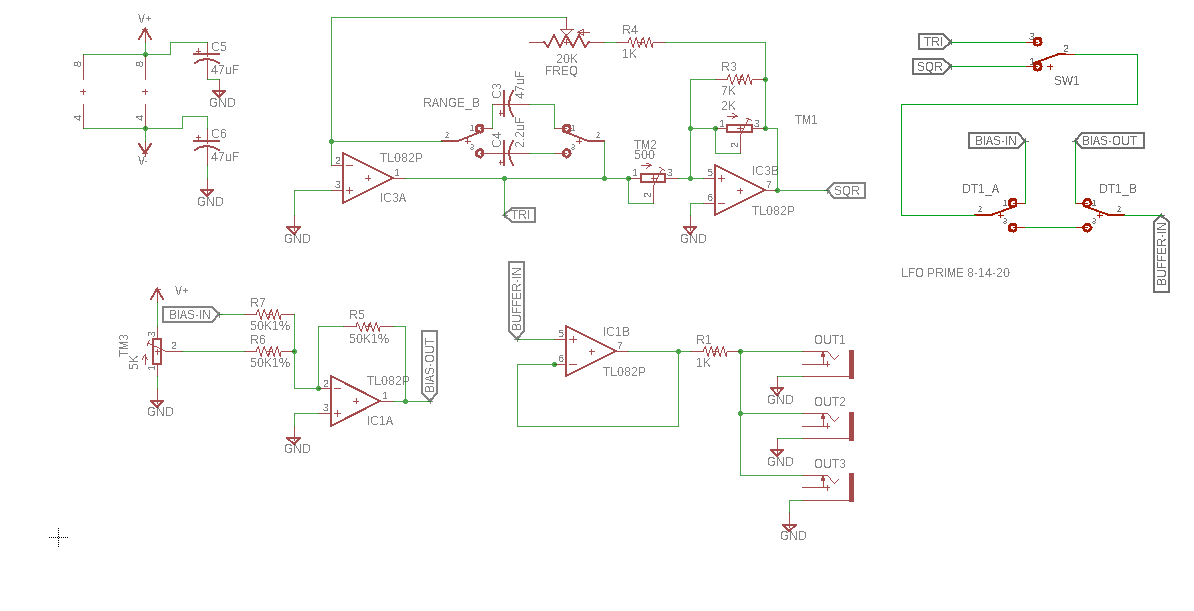 OK, some of that makes sense but some of it is--strange. Why use trimmers for TM1 and 2? Why use a 5K trimmer for TM3?  At the very least, now I'd put 50K in for TM3, which won't change things, but save a bit of stress on power supply for this circuit. But at this point I am not messing w/ any of it.  I might fab up a PCB based on the schematic above someday to see how and if it works. UPDATE 11-15-20! Yes, I did this, read on....
PCB of the LFO prime laid out, fabbed, and stuffed--and yep, mistakes abound.  First up, based on the original schematic you can find all over the internet (e.g. here, see fig 15), the op amp stage that produces the square wave has its inverting and non inverting terminals flipped.  How many times will I make this same mistake? Surprisingly the circuit still works, sort of, but the square wave looks crappy on a scope--a sort of square/triangle mix, and the triangle isn't very crisp. VERY NICE. Still musically useful? Maybe. Next, the voltage feeding TM3 should be V-, since it's inverting; as it is, you can only bias the waveform down, between GND and V-, which isn't what I want. Finally the frequency knob is wired backwards, so CCW is as fast as it will go. These are all easily corrected, but, yep, based on the 3340 kludge rule, I'll have to fab another one....
As long as the LFO was on the lift: The module also had a power cable that was too short, I remember making this by hand out of crimping tools. 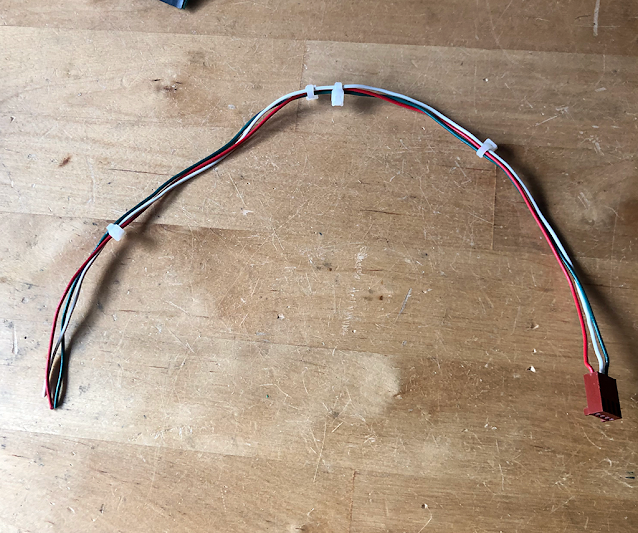 I replaced that with what I've been using for the past few years: expando and a factory 4 conductor, PAIA Frac-friendly power cable, much fancier and less likely to get tangled: 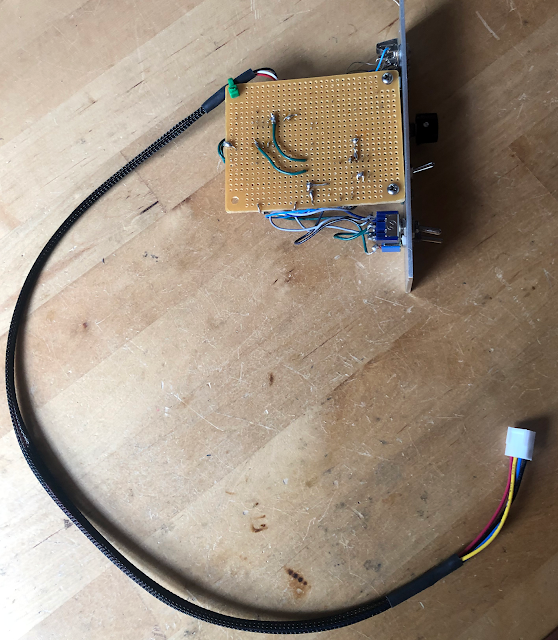 But some of the crap-stuff was left in there: The grounds for the output jacks are 3x bare wire. Why? No idea. I guess I mostly just didn't know what I was doing. 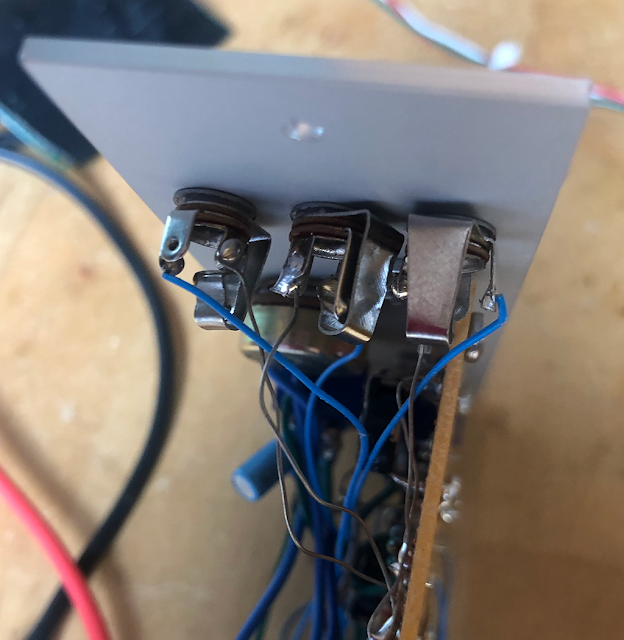 If you've made it this far, no doubt you are wondering: why am I even writing about this? To a large degree this week's work was a simple repair and front panel replacement, and isn't noteworthy.
Besides, we hopefully all get "better" as we do pursue a hobby more and more so yes, I can go back to earlier work and think--wow, that design choice was really stoopid!
Instead, what I've been mulling over: back in 2003, since I had no idea what I was doing at all, I sat at the bench and screwed around with perf, plugged in components and listened, plugged in another part and listened, went back and swapped in B for A, and on and on. Some of the component choices I ended up with still baffle me, but, whatever. What I got back in the hit-r-miss days was almost always something I really liked, and this LFO is one of those. To wit: The BIAS offset values are, to my ears, exactly where they should be, the frequency control range is as well. Sure, this LFO is only triangle and square, but fine, that's what I need 90% of the time.
If I designed an LFO now I'd add all sorts of other goodies--variable waveforms, LEDs, CV control of frequency, blah blah and yet I'd wager this LFO is still where I'd go when I needed some quick LFO.
So the lesson here, I think, is that the days of just goofing around, getting stupid, cobble and mod, and not worrying about "getting it right" should continue--always. To put it another way: getting it right in terms of sound is more important than getting it right and should never be overlooked.
at August 14, 2020