I finished (!!) my arduino based Synth DVM, it worked last night anyway; need to do a few final software tweaks then will post.  As always I am sure someone can improve it, but it's working well.

Part 3 is here.  Let's get the OLED meter to look "analog"

How it looked about a week ago...front panel an "alubase PCB" from PCBWay....the PCB is already bolted on. Along the way I found a cool and easy way to make an Arduino treat audio like it's running through 4066 cmos switcher. Maybe better?

It's a nifty enough trick that I thought it should have its own post.

If you've screwed around with Arduino for more than a few minutes you find the things don't like negative voltages w high current on their analog pins.  since my SynthDVM is chock a block with negative voltages--it needs to read negative voltages relative to ground, I had to deal with this.  OK....

As long as you're careful with your design, carefully incoming limit current, we're fine, there's diode protection in the Arduino analog pins, but what if we're not fine?

Just to be safe, negative voltages at analog pins should be designed out if possible?

But this will chop off some of the upper voltages close to 5V and voltages near Ground.  Not good for a DVM!

Or block the negative voltages/reverse bias current using a diode....

You'd still have to figure out a way to limit the upper voltage since Arduino pins don't like to see more than 5V relative to ground, maybe use a zener for that?

But for a DVM this is a non starter--the output voltage sees a "diode drop" of .6-.7V which for a DVM application probably isn't good--we want incoming signals to be as unadulterated as we can. And diodes are temperature sensitive....

How about a rail to rail op amp?  I probably could have made this work, but I fried my last R-R op amp on the bench working on another project--oh well. There is also the consideration that many R-R op amps allow signals over that can go above the VDD, but I figure Arduino can probably roll with that.

Thinking about this project, I should have just bought more rail to rail op amps--yep I should have dug into this idea more.  It probably would have simplified the design a lot. Something for a future post.

AC couple and then do an DC offset?  That would have limited my measurable signals to something like +/- 7V by my calculations, and from +/- 15V supply I wanted to be able to measure more like +/- 12V.

There are lots of ways other ways....

I discovered a way to do this by accident: you can use Arduino digital pins to clobber an analog signal, negative or positive, as long as it is less than say 30mA (as I read the Atmel datasheet, it's 40mA, but let's stay far away from that....)

So how about this hack: 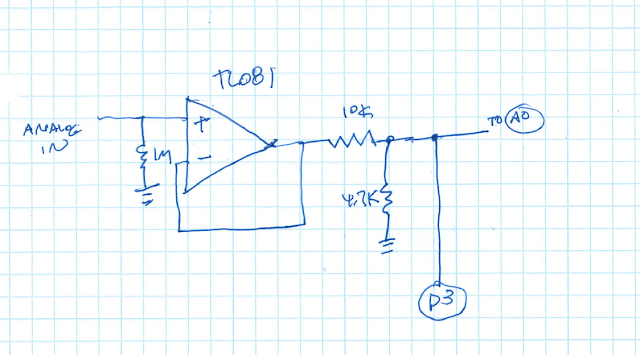 You still have to protect things to not go over 5V--I used a voltage divider as you see here, which for me worked fine but if you're really concerned, perhaps use a zener to limit the top end to 5V.

For an inverting op amp, it's the same idea--connect the output pin to a digital pin on the arduino and suck the signal out of the op amp to ground.  I think I did this something like this, I will post the final schematic soon:

pinMode(3,OUTPUT);
digitalWrite(3,LOW); // PIN3 is now a working ground. Send a signal destined to go to A0 to ground; so we clobber analog signal to A0

So that means that you can use this trick to turn on and off analog signals as you would (say) a 4066 or 4016 cmos switcher. Output/Low the signal is off.  INPUT, the signal is on.  Easy!!!!

Cool! I didn't think it'd work but it did!

Questions:
OK More on the entire DVM project soon, I am pretty much done, just need to finish the documentation. I am pretty happy with how it came out....and that I stumbled into this OUTPUT/LOW INPUT hack along the way!  OK enough until next time: don't breathe the fumes!