Life in Lunetta Land must be vibrant--my previous post (here) about a 4x Lunetta Oscillator based on the CMOS 40106 IC is one of my most viewed to date.

This time we carry on with part II of ReverseLandFill.org's Noise! Oscillator build (part I of this post is here), combining the AD5254 digital pot board from last time (here) with Martijn Verhallen's Lunetta design. Update: 3-24-20 I added a 4x Arduino controlled CMOS MUX to this--post is here.

Martijn did his usual great job on the initial board, but I can't leave anything alone....hence the digital pots. If you want to hear how the module below sounds so far: clip is here. I'll be adding more circuitry to this self-contained synth and will augment the clip in the future, but so far NASA we already have strangeness. 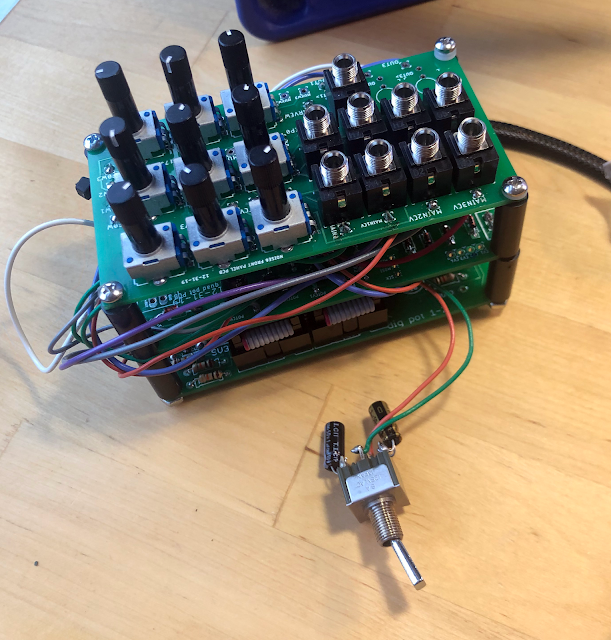 WTL? The concept of my "lunetta stack" is pretty simple--I slightly revised Martijn's original design (he was kind enough to send me Eagle files) to accommodate the quad pot board from last time (here) and then stacked a board on top of it to hold "tall trimmers" and Thonkiconn PCB euro Jacks. That gives us quick control over the CMOS 4093 oscillators which feed a 4040 counter. There is a 4070 XOR IC on the board as well but it's not wired to anything (yet). That addition will be coming one of these days. UPDATE: 4070 is now being fed by a 4051 mux....works.  Post is here.

To use the board, for now, let's just power up the stack and plug the output into our DAW.  That's what you hear in the demo--this is all Noise! w/ the quad pot CV board, and a bit of reverb or delay or other minor FX from the DAW so your speakers aren't ripped to shreds. And: the sounds you hear were not created with complex modular patches--just LFO and audio from a single VCO fed into the noise! circuits' various CV ins. Full disclosure: the Noise! board isn't a good fit for a traditional JS Bach revival concert but nevertheless, Martijn's cool design has yielded one of the strangest sounding modules I've built to date, and maybe that's not a bad thing. 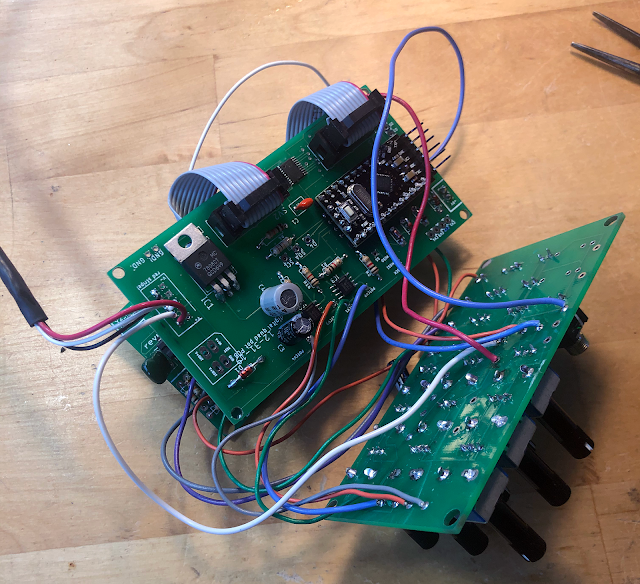 The idea of stacking boards is not new--the whole idea of "skiff builds"is based on that; for instance, see the SEM attenuverter project here. For Lunetta work I am trying to standardize on 2000 x 3750 mil PCBs because that will fit pretty easily behind a 20HPish Euro and/or a 2u Frac; I want to keep things small. For this particular build though, I am thinking about putting the entire finished Lunetta synth into a goofy lunchbox, and maybe creating PCB front panels to live inside? not sure yet....that's something for an upcoming post. 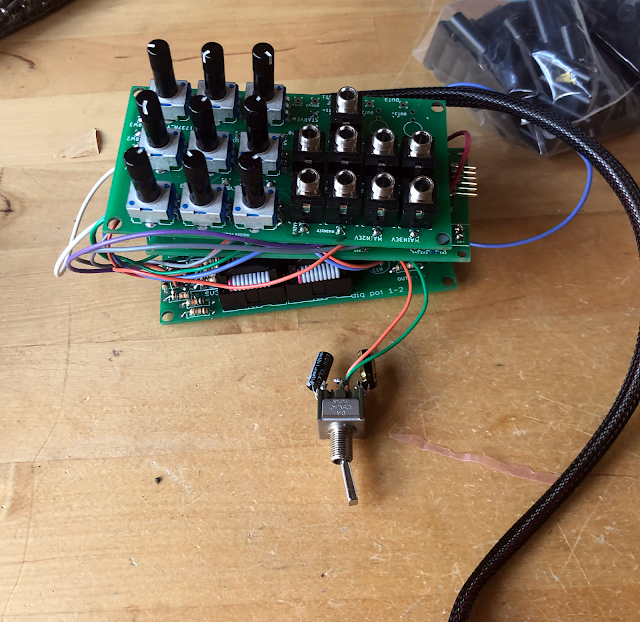 One thing I did find out is that #4-40 Phillips screws aren't easily found longer than 2", but I guess that's OK, how big should this stack be, really? 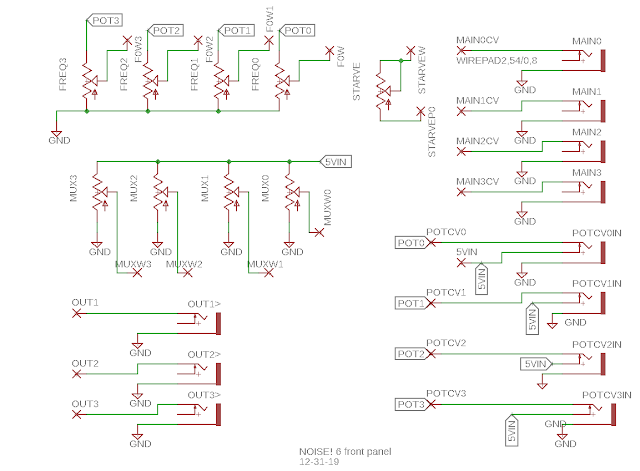 Dirty Pun omitted! The jacks board is mostly for convenience--debugging and troubleshooting would have been a nightmare with jacks and pots flailing all over the bench. Not sure if I will reuse this "jacks PCB" for the final version of the stack--probably yes but who knows.  Update--read Reverselandfill's post about this post here. Go reverselandfill!

OK what next?  The CV ins for this sound extra bizarre with DC VCAs in series, so I designed a 2x VCA board in 2000x3750mil for that, but it's still off at fab. Same with a 4x 4051 CMOS switching board that I will use between the main board's VCOs and some additional outputs. (Update--4051 MUX board is done and works. Post is here)

Those 2 boards, added to the project, should further add to the unabashed craziness I hope.

I'll do a part III for all of that, but as it sits this Lunetta setup is already pretty fun. With a few more boards in the stack and this thing hot but not smoking I'll eventually post all of this on my website including instructions about how it's wired up, but for now it's still a work in progress.

On a minor note: one of my 3340 VCO builds smoked a couple of nights ago--still not sure why--I am still breathing the fumes--this mishap didn't burn down the house, but stunk the hell up out of my project studio. Let's hope today's project doesn't suffer the same fate.