Howdy again, it's time to get into the time machine and go back to 1974, let's build an audio filter in the spirit of the legendary synth kit maker, PAIA. To wit; a 2700 series filter, that was my first synthesizer, built it with my brother from a kit, and after many hours of fab it sounded pretty damn crappy as I recall.

But hey it got me started down this path right?

PAIA still has a place in my heart, so when I was cruising on the E-M DIY forum and found a reworked schematic of the classic PAIA 2720-3B Bandpass filter from gasboss775 so I said hmmm..... 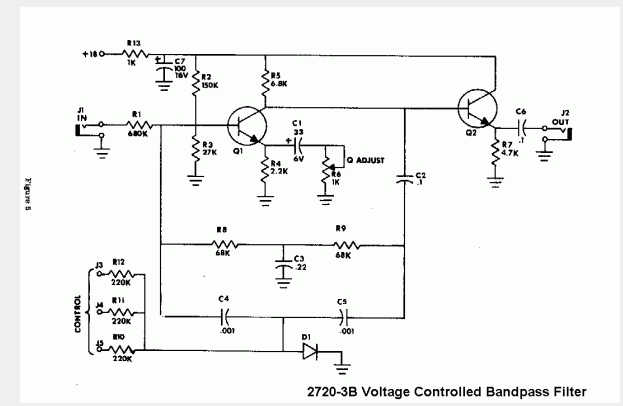 This was reworked by gasboss with different variations....to me, the one that looks like it catches the spirit of PAIA hegemony is this one: 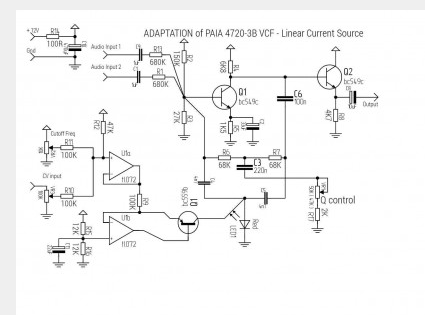 Yeh the 2700's VCO's wouldn't stay in tune and its low pass filter was a trailer tragedy, but I remember the 2720 3B bandpass filter sounding a bit better than the rest, especially when buffering its output with the PAIA 2712  inverter buffer module.

Looks like some of the EM members strip-boarded the gasboss rework and it works!

But me--strip board?  Who needs that? Let's fab up a PCB and try it out: 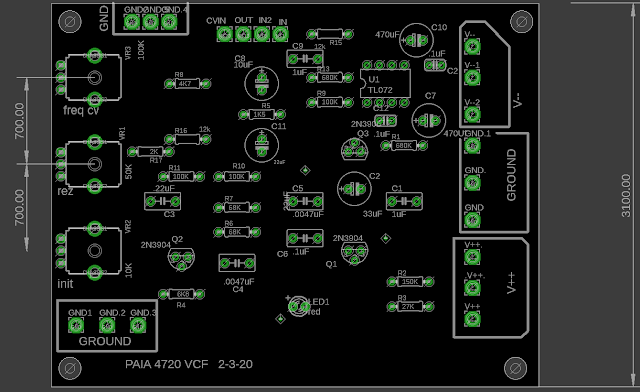 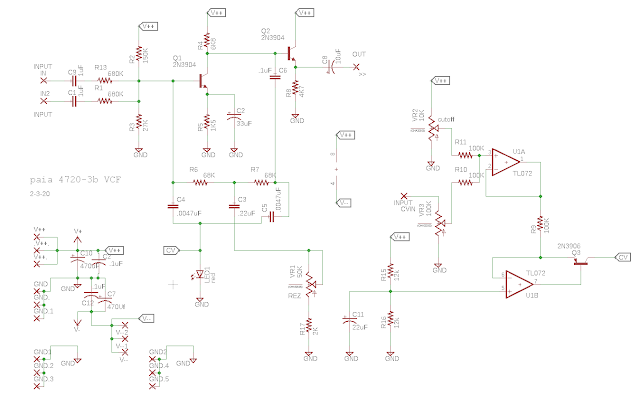 Back from China and it took me about two hours to fab on my bench: 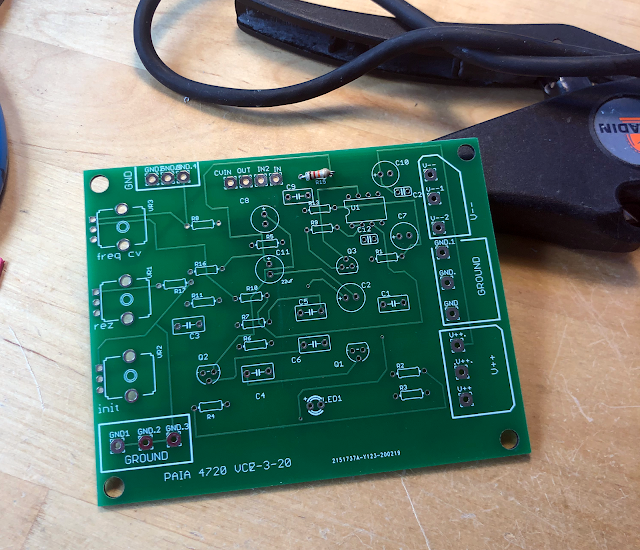 PAIA in the FACIA: At first my build of gasboss' 2720 variant sounded rel bad--all sorts of issues with driving the filter cutoff, tons of distortion at output, and other maladies.

After a couple of evenings of messing with the circuit and some malodorous swearing, I realized I forgot a critical resistor in my schematic capture: R12, which was screwing w/ the frequency cutoff.  Easily kludged in....

OK That fixed some of the CV issues but the VCF still sounded a bit, well, mild (but I remember the original 2720 VCFs not having a lot of drama either).

After more experimenting, I discovered that using a BOWAL front end (post about that is here and here) to precondition incoming CV helped the sound a lot--the filter seems to respond best when I have control of not just CV level but also CV bias, and then if I crank the CV way down into bipolar-CV-land the gasboss 2720-3B starts to sound a bit more juicy.

I have to think about why that is for a while, but whatever; I will do a revision that includes a BOWAL subcircuit/incoming CV buffer--the CV input should be buffered anyway....

The output needs to be buffered/boosted as well; I fully remember that being the case on the original 2720-3B.

OK: it's time to revise the layout and then do this all again. I'll do a follow up post and hopefully create some sound samples.

UPDATE: 6-9-20 Board is finished, I added a 2nd board and made this thing skiff.  2720 filter Post Part II is here. Website post about this project is here. Soundclip using finished 2720's is here.