I was at the Vintage Synth Museum and got to screw around with a Classic VCS3 Putney.  No, not a clone, not a VST; this is the real thing. This is an incredible sounding synth and deserves its legendary status, but the best part I think is the peg board patcher.

You put in pins to choose from a matrix of patching options: 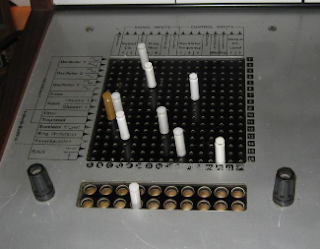 I'd love to be able to include a Putney style peg patcher in some of my DIY projects. But...I have not seen patch bays like this for sale, have read if you ever do find one they cost hundreds of dollars. So let's DIY. Can we do this budg?

Whipped this up with Eagle: 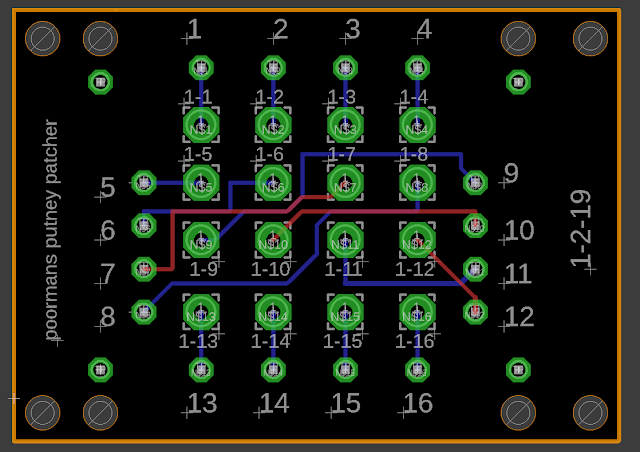 Had ten of these made up at JLCPBC in China. $5 for all of them. If anyone is interested comment and I'll post the Eagle files and gerbers somewhere.

OK--need the pegs. But what,Scotty, what? Bought these on Ebay--chose them carefully based on the size of the vias in the wire pads found in the PCB, they were about $25 USD for a hundred: 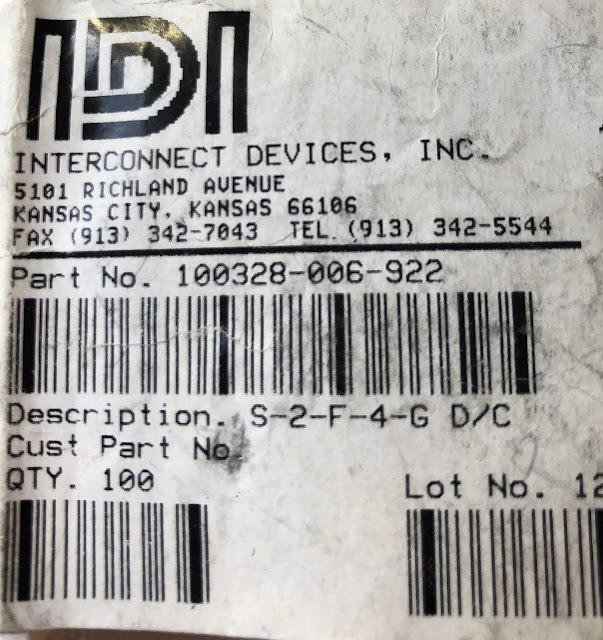 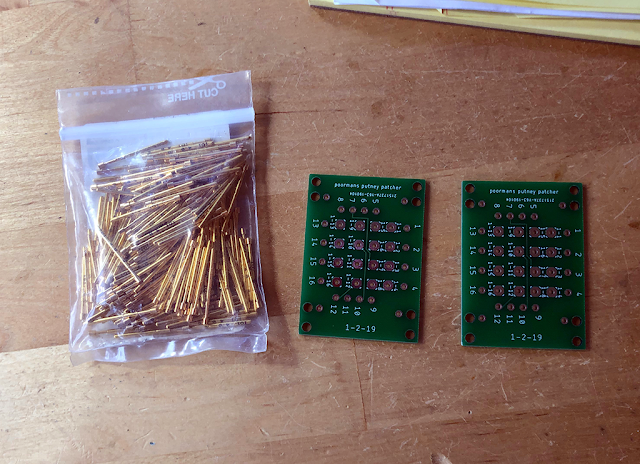 Screwed it all together (still missing top nuts; added after I took this photo): 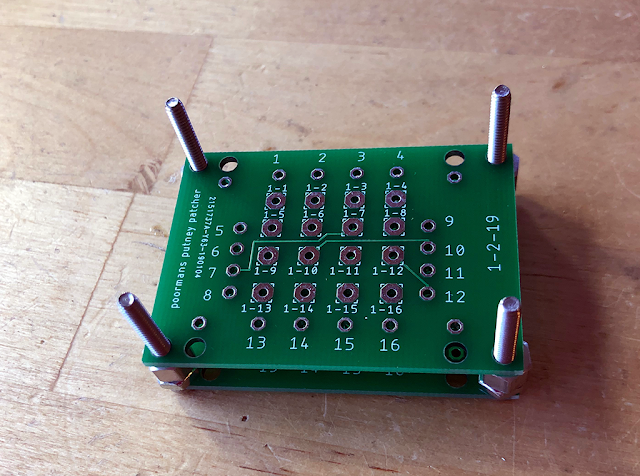 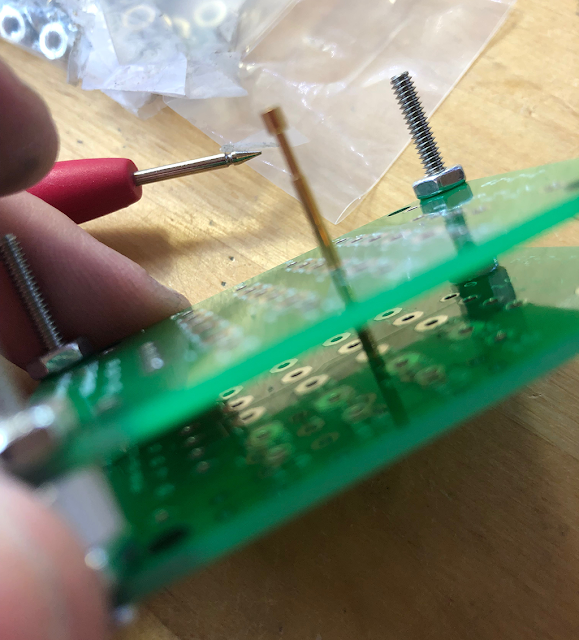 With the peg through hole 1 x 1 from top board to bottom is continuous. Same for all other pins.

I now can see putting buffers and mixers around this matrix, but the basic idea--the ability to patch with one of the pins--is sound. Heck I could even build little plastic tops for the pegs and epoxy em on there?

But here's the rub, literally--Will it last? I can see the pegs wearing out the vias in the top board. Hard to say how many patches you'll get out of this system--I guess that's to be seen.

I've only patched each point about 10 times, some less. On the putney at the museum a few patch points were worn out--and that was the real deal--so I guess nothing lasts forever. I might need to find slightly smaller diameter pegs? That might spare the vias a bit longer? Or springy pegs somehow?

But anyway for now this simple matrix patcher works!

Applications: I may apply this to the noise! circuit from reverselandfill that I've been screwing with for months. That would be a good test and that circuit needs a large switching matrix.  Or maybe for an entire Lunchbox Lunetta setup. No idea really.

UPDATE 10-6-19 using 2.5mm spring banana plugs purchased from Amazon; it works!  I modded the top board w. 82mil drills, which seems to be the right size. I think the top board will last much longer, since the plugs are spring loaded; I patched and unpatched a whole bunch of times and couldn't see a lot of wear on the top board under my microscope.  Thanks to E-M member Phobos for suggesting this improvement. 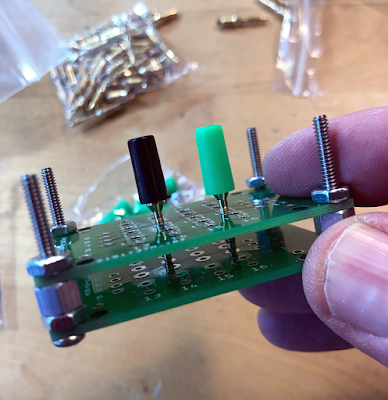 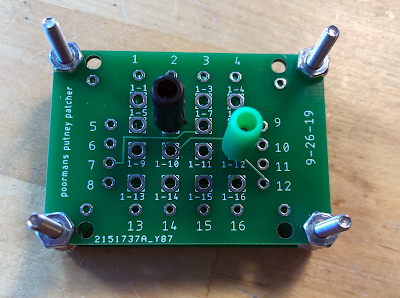 Does the world have enough Balanced Modulators? Maybe and yet, I'm still building them.

Turns out mvcl is a neighbor, living only a few blocks away from me in sunny California, US of A; we began trading emails and meeting up at our local Modular Synth electronics meet up.  And! MVCL has access to some great chip pulls from the old days, some coming from video boards he built in the late 1970's.

One chip of interest to DIY audio is the Burr Brown analog multiplier, the BB4214: 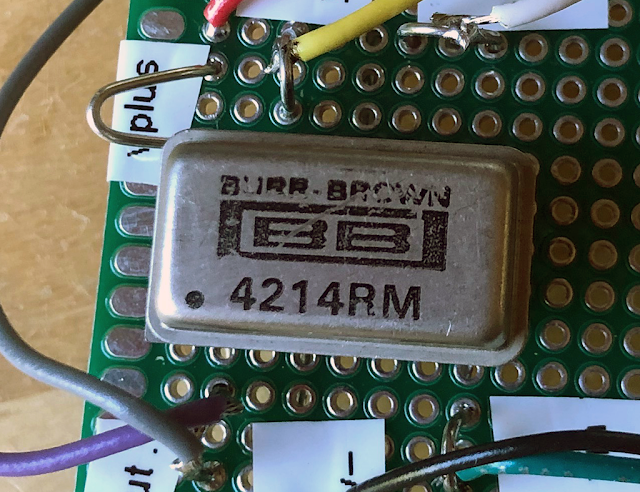 mvcl asked me if I was interested in messing with this chip and after looking at the datasheet--the chip has tremendously good specs--I said sure!! and so he dropped one off at my house.

Before too long I had its "connection diagram" on a breadboard, super simple--literally NO external parts! Wait, no additional parts?  YES! NO ADDITIONAL PARTS!  Just +/- 15V DC power (note to Eurorack/Doepfer-smokers--this should work fine with +/- 12V as well!), 2 audio waveform sources, some jumpers, a scope and audio amp/speakers to test: 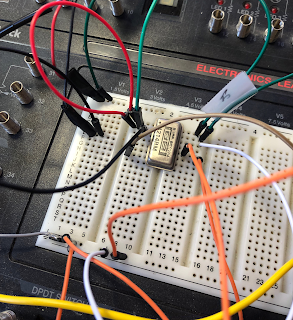 It sounded--GREAT! Clear, crisp, clean, with little to no feed through, no hiss, no cross-tweeze, just as the specs would indicate.

So it's on to the next step--perf board!! Readers of this blog know I hate (and am very crappy at) perf-boarding and strip-boarding, but this one is so simple even I can't screw it up. I added a simple 4x unity gain buffer board--get info on the buffer board I used on my website, here: 2 buffers for the inputs, 2 buffers for the outputs. Again super easy.


It was a piece of cake to wire this mishpucha to a Frac 1U Panel, add a few jacks and so on, the whole thing took maybe a couple of hours, including breadboard and test time. Yeh!!! 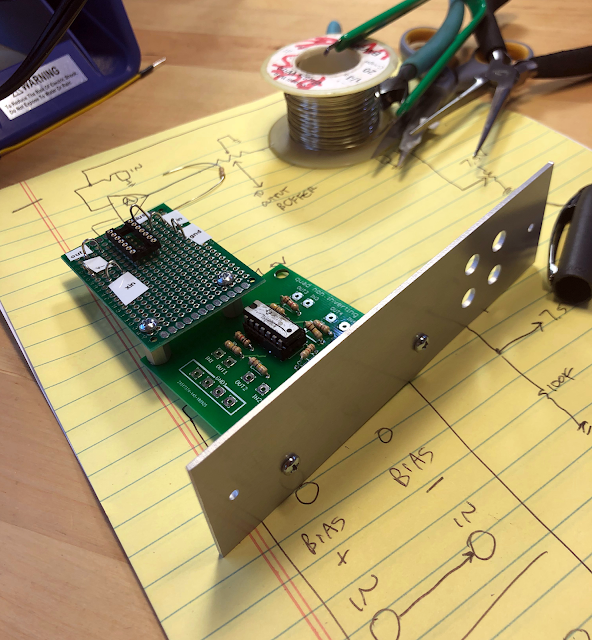 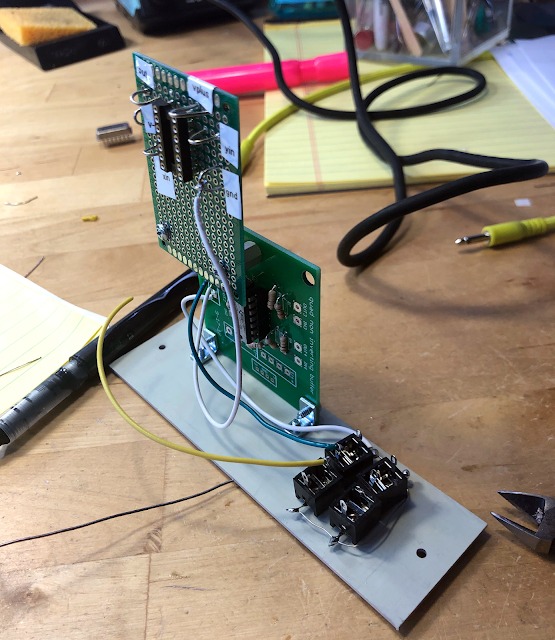 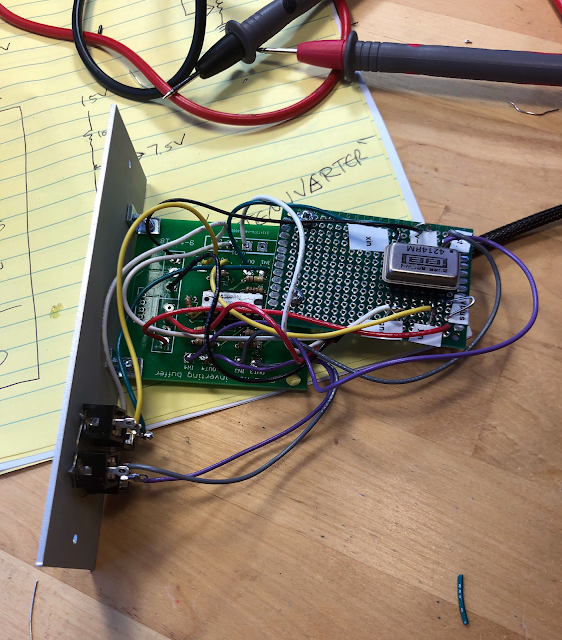 I built this thing as fast as I could and it still worked first time!

Here's a MOV-ie of the board being tested. This is 2x VCO's (ramp), VCO1 modulated by an LFO and then fed into the X input, VCO2 fed right into the BM's Y input; BM output to my near field monitors. That's it.


In case you want to hear more: bonus sound clip is here.

OK could anything be easier? This chip can still be found on Ebay ($10-$25 each, worth it!), I am not sure if different flavors of the chip sound different, but if you want to mess with a super easy to build balanced modulator, I mean it can't possibly get any easier than this, the BB4214 is highly recommended.

Many thanks to mvcl for turning me onto this great old chip and all his encouragement and enthusiasm.  Until next time, happy BMing!
at August 15, 2019 No comments:

Attenuverter Part I: Prototyping the SEM way to do this--Pot with Center Tapped Ground

All hail the mighty attenuverter!  This time I build one--and I break one of my cardinal rules and strip board most the prototype--spent 2 days doing that--UGH!  But now it all works, sounds good I think, and should lead to an interesting PCB project, maybe this month? We'll see!

Backroundverter: I laid eyes on my first attenuverter in an Oberheim SEM (circa 1977?). I was barely old enough to drive and also lucky enough to be doing synth programming for a local recording studio; they had an unbelievably cool Obie with x8 SEMS, customized to chooch on 2 banks of 4 SEMS, giving me 4 stacked polyphonic voices. Wow! Mono was still king back then for the most part; the Obie 8 voice sounded frigging GREAT!

The idea of choosing between + (normal) and - (inverted) mod for a CV was super cool; especially for the VCF when set to bandpass, highpass or notch. The SEM synth sounded, well, they are SEMs! Damn, it's freaking Oberheim!!!


How it works: an attenuverter is basically a single pot mixer. Noon is zero gain; CCW is 0 to 100% of one signal, CW is 0-100% another.  Most often the CCW signal is an inverted form of the CW signal or rarely, visa versa.

You can find euro attenuverter modules all over: for instance, here, here, and here, and of course MATHS has one--yep, 40+ years later these puppies are everywhere!

The basic circuit fragment looks like this--it's easy: one op amp, one pot, and a few resistors: 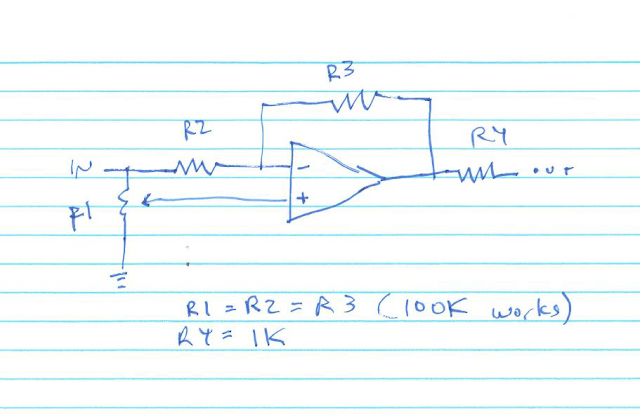 I have created an online SIM of this circuit fragment here if you want to mess with it. Or lay it out on a breadboard, this is easy stuff.

But be warned: on the bench the above fragment doesn't sound as good as the SEM's. There is bad control w/ this fragment close to noon, and maybe from 10AM to 2PM; it's like someone screwed up the taper--you get very little, then you get too much. Good enough? Nope.

There is a blog post that hops up this circuit fragment here to address: here, before going down the SEM road, check that out?

But I took a different and more difficult approach, since I wanted to 100% nail Oberheim's take on the attenuverter. Why ever make things easy?

The SEM schematic is online here; from that, turns out Oberheim uses (used?) a relatively obscure part for the SEMs attenuverters: potentiometers with center tap ground.  This is a normal pot but with an extra leg halfway down the pot's winding. Using this "fourth leg" you can hook the middle of the winding to ground or whatever else you want and then wipe to your heart's content:


Having never heard of this part, I confirmed with Tom Oberheim via email (and yes, he emailed me back! Yeh!) that a CT-ground pot is key to the classic SEM's attenuverter. yes it is!

And good news: Mouser has an ALPS version here (data sheet is here) so I bought a few.

Basic layout is this:


If you hook the center tap to ground, as you approach noon with the pot's wiper more and more of the + in is shunted to ground, same idea for in - (which I mistakenly label as the other IN +).

From here it's an easy matter of having an input buffered and inverted and presenting each signal to the appropriate lug: 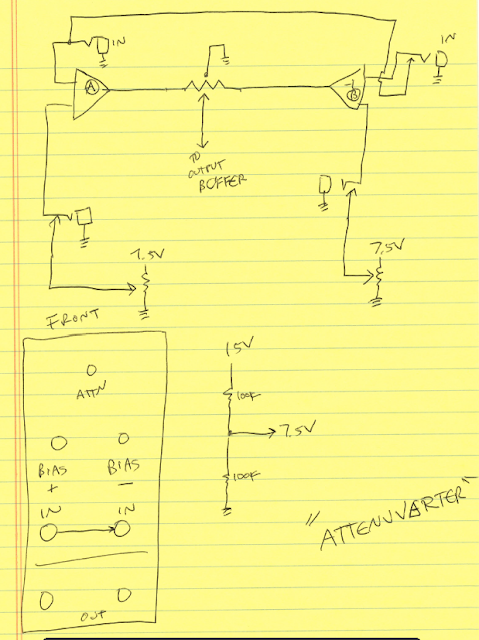 A and B are op amp buffers, B inverts while A doesn't. I used some jelly bean SMT boards I created for other projects, you can find details here, but really any buffer/inverter will work, and there are lots of variations to choose from.

I also added Bias Offset/Amplitude modulation independently for each side (the CT pot makes that easy!); more information on that idea is here.

And the output follower/buffer--which arguably isn't needed at all if your design disallows the op amps to short to directly ground--is the same unity buffer amp you see everywhere:

Building the Prototype: I was in a rush to get my Center Tap ground pot into play so I went against one of my cardinal rules and strip boarded this prototype (but isn't everything we DIYers build a prototype?). This led to the usual flubs, screw ups, cursing, fear and loathing, and reminding myself how much I hate strip board, but I did finally get it to work.

I'm sick of the thing now though, and probably won't create a front panel for this messy bunch of wires and daughter boards; rather, come up with an improved PCB and front panel and go from there.
Update: yes I did! Long live the Mike Matthews antistrip boarding society! Go to part II of this post here.) 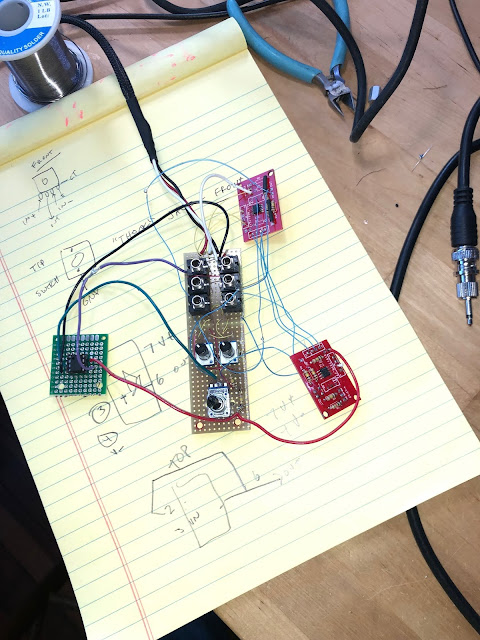 OK, now that my strip board catastrophe works, the attenuvaterization--I doubt there is such a word--is satisfying. Onward! I am not done with center tap pots by any means!