Let's jump right into the why.

I have been corresponding a bit with an audio DIY master: Grumble, from the electro-music DIY audio forum. Just when I think I've done something cool, I see what Grumble comes up with and shake my head: this guy has extraordinary DIY skills!

A lot of Grumble's projects (but not all) are digital in nature, using Atmel  MCU's.

I was curious how some of his code works and Grumble was nice enough to send me some of his Atmel C code for study.

Hmm, not entirely what I expected. It seems his projects are too advanced to be easily crafted from Arduino's super friendly sketch programming language.
Instead, Grumble uses what professional microprocessor programmers call "pure C" or "AVR-C" or "Embedded C".

What's all this then? Arduino's sketch language is a library, written in C and C++, allowing us DIYers to do hard things quickly.

However, if you peruse the libraries that comes with the Arduino IDE you see code like Grumble's. That's because the Arduino sketch language itself is written in C and C++.
I read that this is what professionals often use when programming these chips. Why? Pure C unlocks every capability of the MPU (Atmel 328P for instance), not just the features and peripherals exposed by friendly open source coders at Arduino and elsewhere.
For example, for 328P 10 bit ADC conversion, using Pure C you can increase the gain of an incoming analog signals before being presented to the MPU for processing. See how to set that up here. As far as I know, Arduino sketch language can't do this.
You also potentially gain better control of a program's size since you only use code space for features you need.
So--enough introduction!.....let's look at some of the common code fragments you see in Pure C MPU programming.
Here's an example of Pure C--what the hell does this mean?

DDRD |= ( 1 < DDD4);  // answer: same in Sketch as pinMode(4,OUTPUT);
Initially I had no idea.  I need to do some reading!
Why read when there is YouTube? A really good (albeit lengthy) video about "why to use pure C, what is pure C, how do I get Pure C, how do I make Pure C work", is here.
For anyone with previous Arduino Sketch programming experience, I think the the video is clear and easy to follow. It's worth a look. 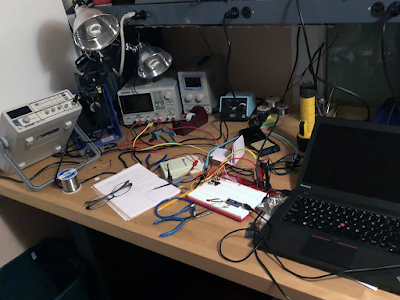 I watched the video a couple of times and began to experiment with Pure C. Here's what I've found so far:

If you want to play along at home: here's a rundown of some essentials I needed to get started with Pure C:

I needed the datasheet for the Atmel chip that describes the Atmel 328P MPU, which is the founmd in the  Arduino Uno R3. Get the ATMEGA328P data sheet here.  Yes, this datasheet has over 300 pages.
Why all the reading? This will seem rudimentary to a professional embedded-C programmer, but maybe less so for Arduino programmers: Embedded C is all about finding bits in an MPU's registers and manipulating them. These registers hold essential information like "is this pin an input or output?" "Do you want this pin go to binary high or low?" "How should this timer work?" and so on.
You flip bits in these registers--akin perhaps to turning on and off physical switches--to make things work the way you want. That means, to master pure C, I needed to understand at a very basic level not just a new programming language but also what many of the AVR MCU's registers really do.  There is no way around that. It's a pretty steep uphill climb.
However, to make it easier, Atmel supplies many #define designations behind the scenes to allow you to use names of registers and bits directly in your Pure C code; these macros match the data sheet, making things a bit easier to keep straight.
1 << TWDS ; // set this bit to zero, see the datasheet for that does....

And--there are a whole lot of registers and #defined bits in these Atmel MCUs. There are also a wealth of  Internet videos and web pages going over MCU specifics, like timers, peripherals, serial protocols, and so on. You can learn more about this from those--so--get reading.

I needed to understand how my Arduino board is wired--really.  If an Arduino board has a different pin designation your Pure C code may not work unless you keep which MPU pin goes to which external GPIO pin straight.
For instance, for the Nano I found its schematic here, which clearly shows which pin on the ATMEGA chip goes to which pin on the Arduino Nano board. You will need that information to interface things like LEDs, switches, etc. to your MCU as you write your code. That's because Pure-C doesn't care what pins are called on a development board, rather, it cares about the pins on the MCU IC itself.
I needed to understand a few strange statements you see over and over when reviewing pure C code.
One we already saw:

This means, for register DDRD, put a 1 (high) into bit DDD4.  This specifically tells the Nano's CPU that pin D4 is going to be an Output.

Getting further into beginner's stuff:

You can OR these "bit shift" statements together:

So how to make DDD4 a zero?  Setting DDD4 is an input? Use a NOT, also known as an XOR:

You also set the entire register--for instance, make every pin in the Pin Group D inputs. Here 0x00 means use hex (base 16) to set all the bits to zero.

And this sets them all to one:

Enough for now? Just with these few discoveries, I can already read small chunks of Grumbles code and maybe see what he's after.
To wrap up: Here is a Pure C program I wrote that compiles in Arduino IDE and flashes an LED.  Didn't work at first, now, works on my bench anyway.
Remove comments, change 1's to 0's, etc., and have fun.

/*
my expanded pure C blink demo.
Nano V3,0, with LED tied to pin D4;
1K resistor between LED cathode and ground so to not fry the LED.
uncomment stuff to experiment.
*/

/*Note: if you screw up TX and RX,
* which are part of the DDDx, DDRX, PINx" pin group mishpucha,
* upload into your arduino a normal sketch with serial.begin().  this fixes it.
*/

SEEED XAIO 2040--New Development Board, Will it Explode?

Hello again!  Back to posts about embedded C and digital.  From previous posts: I've been working with Raspberry Pi's RP2040 MCU'... 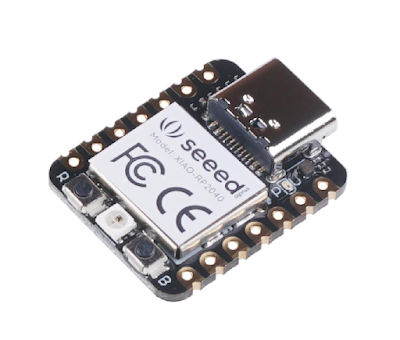