Taming Vactrols with an MPU--Part I: The Blah blah intro, Will It Work?, and Related Ideas

All hail the resistive opto-isolator, aka "Vactrol". So slow--so unpredictably funky--so malodorous--I love these parts! It's an  LED tied to a photoresistor---LED action equals resistance. Simple stuff right? 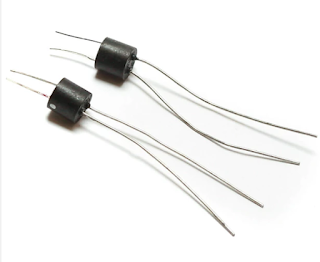 Yes, but there is a reason you don't see optos in every VC synth circuit. Vacs are the girlfriend who plays great bass but consistently smells bad: promising, but in many ways, far from ideal. 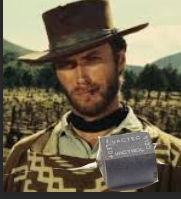 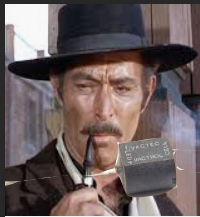 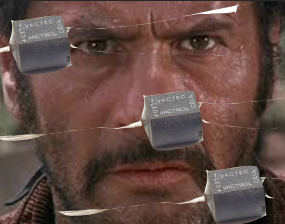 Want more? A really good description of a vac, from Doepfer, is here.  A previous AudioDIY post about 'em is here, my own Vactrol based multimode, low parts count VCF is here.

OK, Wrapping up this long ass intro: ah, the opto. Buchla's legendary low pass gate uses 'em, MakeNoise uses 'em, DIY compressors use 'em. I use 'em. If you don't yet, go buy a bag if you ever see them surplus and mess around with them. Yes they will drive you crazy, but also, like the aforementioned punk rock bassist, hold your nose and have hours of fun.

OK without further Vacdoodoo: Here's part I of next batch of Vac-uuous--Vactaitious--Vac-trolius--AudioDIWHY posts: can we use an Arduino to tame a Vac?

Goes like this: I was lying in bed thinking about Vactrols (yes, I do do that) and figured the snot-slowness cannot be helped. But how to solve the other two issues--that one vactrol is never like the next, and Vacs extremely non linear. And then it hit me, bolt upright in bed: can we use an MPU to ameliorate!!!! 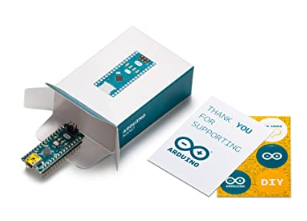 My thinking, in its simplest form:

Why wouldn't this work?

Next I started to think about how to get the voltage out of the MPU.  We could use an D to A IC, but to reduce parts count, let's try leveraging the PWM that Arduinos can produce.

Could it be that easy?

And a more out-there idea: we could make a second Arduino be a"table creator programmer" and then blast the lookup table created by MPU #1 into a second Arduino's lookup table. That might speed up deployment of this linearization MPU. This idea is still a bit (pun intended) "sketchy" but is still worth more digging around.

Who Needs to Work when there's ADIWHY?

This idea went OCD on me and I almost didn't go to sleep that night but had to eventually. (damn day job).

Before I got on the train, I posted on the E-M forum to see who has messed with Arduinos controlling vacs--post here--seems like that's a big no one--so let's get to work!

I did do some breadboarding the next evening to see if this was feasible. 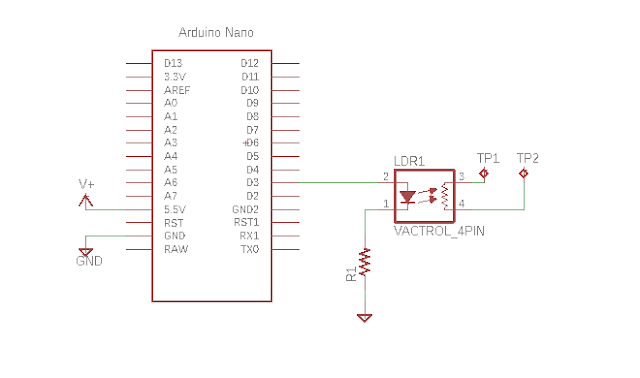 You can get the "dim LED analogWrite() test sketch--get that here--drop it into an Uno or Nano and modify the sketch to the appropriate PWM pin. Breadboard it like the schematic above.

Next, put your ohmmeter across TP1 and 2 and yes, as the PWM duty cycle changes you will see some resistor action. I got something like 10K to 40K out of one of my junk box vacs in this extremely simple config.

Might be useful for something right off the bat, even without tackling the lookup table? 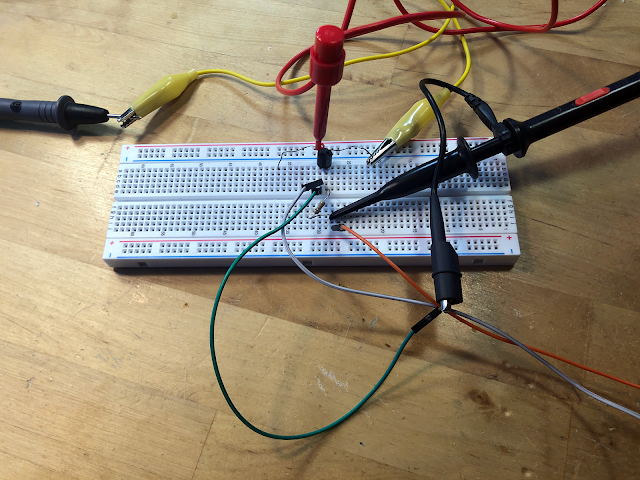 Mildred, can I get more? It'd be nice to get a wider resistance range out of this, and intuitively I figured the Ardino can't source enough current for that.

I put aside the Arduino for a minute (why mess with more programming at this stage?) and fired up my Siglent function generator.

Next I perfboarded a very simple current booster:


I tied the fragment above to the breadboard junk box opto: 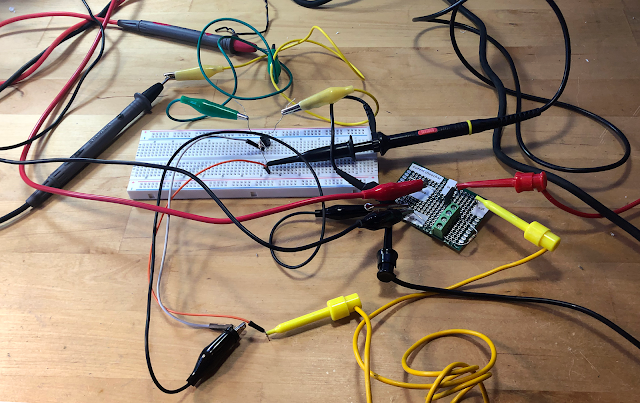 I set the pulse frequency to 10K; used a 5V-0V pulse wave, varied the PWM as per the table below, and here's what I got:

So we've created a somewhat decent 50K resistor here. We can't go down to 100ohms which would be nice--can't have everything I guess but this is still useful.

I found that by experimenting with different optos, different C1 values, different pulse frequencies, and different duty cycles, I could get results in the 1K to 2M range, which might be good for something like a VC glide circuit. So in general, controlling a Vactrol from a PWM source works.

Or does it? A big problem I am grappling with as I write this post: at high resistance ranges things get unstable. The resistance from a single PWM setting jumps might around from say 1.5M to 3M.  I figure I have to beef up the RC filter above to improve this, which I will work on in a bit. Stay tuned.

Bits and more bits: Grumble aka Big Dutch Ed from the E-M forum notes that the native analogWrite() Arduino method produces only 8 bit, 256 PWM resolution, and we might want something mo-better. He's right. We could set up 16 bit PWM for the Uno, but it's a tad kludgy, so let's see what else is out there.

I dug around and found the Espressif ESP32. Good news--many vendors make this processor into a sort of Pro Mini on extreme steroids by dropping it on a board, adding a crystal, pins, vreg, etc., the usual Arduino type setup. For those, it seems that the PWM pins work at 15 bit out the box.

Wait, it gets getter: the ESP32 has 2 independent cores, Bluetooth and WiFi built in (so you could make your audio vac chooch from your cell phone?? Are you kidding me?), and its many dev boards and clone dev boards can be programmed using Arduino IDE. Yes and Yes and Yes.

And all for maybe $10USD a piece. Holy IOT, Batman! ESP32 is a truly amazing bit of kit, especially at that price. If nothing else, this Arduino + Vactrol road has led me to what looks like an amazing inexpensive microprocessor I didn't know anything about before.

The Auto-table idea:
Final idea: how to speed up creation of the lookup table.

I don't want to have to hand-enter a lookup table each time I use a new vac. I was discussing this project with E-M member (and a neighbor of mine) MVCL and he suggested something more like this: 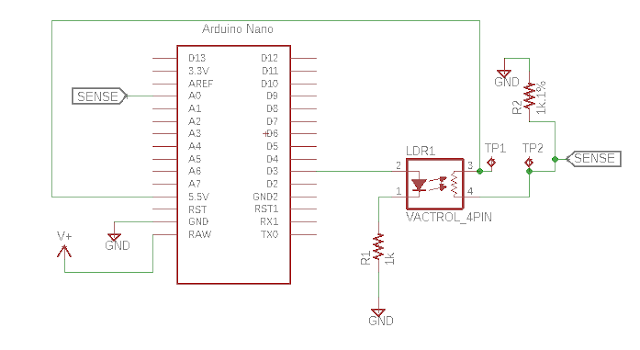 
The issue here is that A0 is only 10 bit, but still, it's a better idea than using 2 Arduinos for this. This will require more work and thought, as always, but again, this all sounds doable, and is a much smarter approach than whatever I had rummaging around in my head.

Next up: I bought some ESP32's and need to see about getting the 15 bit PWM working.  If those MPUs work as pulse generator with 15 bit PWM accuracy, I might get to building something that is musical soon.  UPDATE: 12-18-19. ESP32 works great--I followed the vid here to get one going in Arduino-land, using a cheap Amazon ESP32 board, Fedora Linux, and the current version of Arduino IDE--and yes, Andreas Speiss rules.

Many more hours of fun ahead!  Until next time, don't breathe the fumes.

UPDATE: Part II is here.  SPOILER! Nope, couldn't get it to work.