EFM Diode Filter: Where have you gone Tom Gambalio?

UPDATE: sound clip for this VCF is posted  here.

That year, a big batch of inexpensive, low parts count synth kits showed up at my doorstep after a long wait.

They were from an outfit called Electronics for Musicians or "EFM".

From this wayback website: EFM was an outfit run by a dude named Tom Gamble. Out of Houston Texas in the good old USA, I am guessing Tom ran the whole thing: circuit design, PCB layout, parts picking, bundling up kits, documentation, mailing out them kits rawhide, maintaining the website, taking orders, and responding to users--sometimes--who complained when their kits didn't arrive or even worse, didn't work.

If Tom had someone helping him I've never read about it.

Yep, I built some his kits; Tom's website clearly indicated his kits were for experienced builders  which of course I wasn't. I bought 'em anyway.

Some of  the EFM kits I built are long gone, some of them are still in my to-be-built box, and a few I still use: his LFO5A, and the dual ADSR Deg2A for instance.

The best EFM module, that I built anyway, was Tom's VCF6C diode filter.

About the filter: Based loosely (I think) on the EMS Putney VCS3 filter the VCF6c is a simple and effective design. The VCS3 filter is discreet while Tom's uses a hard to find 13600 OTA. But Tom still cops the basic idea.
UPDATE: 5-28-20 13600 OTAs are becoming unobtainium, I tried out a 13700 OTA, much easier to find and it worked--I can't hear any difference. The 13700 OTA works for this design! 13700 and clones can be had from places like Druid.

I think the VCF6C sounds pretty good. Maybe sounds really good! It's been my go-to filter for traditional subtractive synthesis in my modular for years now.

The EFM diode filter kit I built in 2004 is kind of wearing out: traces have corroded and have had to be replaced with bus wires, things like that. I wanted to make sure I kept this sound alive in my modular, so using the PDFs from this site and forum pdf capture I fabbed up another board. 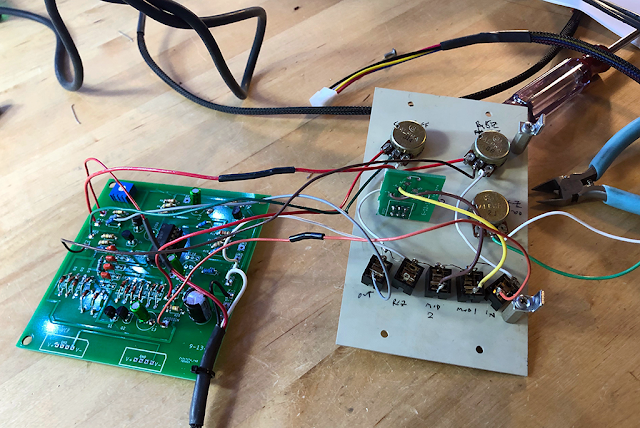 My 2 cent soapbox take on EFM: Tom's work was always a bit--rushed? His kits were missing parts at times; there were frustrating IC-frying errors in the PCB traces, schemos and BOMS (but then again, who am I to talk?). Maybe EFM was a bit like a microscopically tiny version of Howard Dumble, i.e., he'd take your money then get you the goods--when he gets around to it--at some point in the future.

For his occasional indolence, people tore Tom a new one in the audio forums, for his mistakes and long shipping delays. It was horrible!

Now looking back, I feel sorry for the guy and feel really stupid for being a dick...I was out what, $15 USD for some kit I was trying to build without a decent DVM or scope?

Tom is (or was? I really, really hope he's still with us!) undeniably talented, produced a heck of a lot of designs and kits and I'm sure worked hard to keep the ideas and kits flowing. I can see him trying to stay afloat in his sweltering garage in Texas in July, gathering up parts, purchasing more caps from surplus places, having to dump out the bag to count the damn things again, while his wife yelled at him for not watering plants and letting their dumb dog pee on their shag carpet.

Tom must have loved audio DIY and electronics, why else would he be so prolific?  But perhaps his passion drove him crazy. One day I remember his kits just vanished, his site was gone, it's like he just gave up. 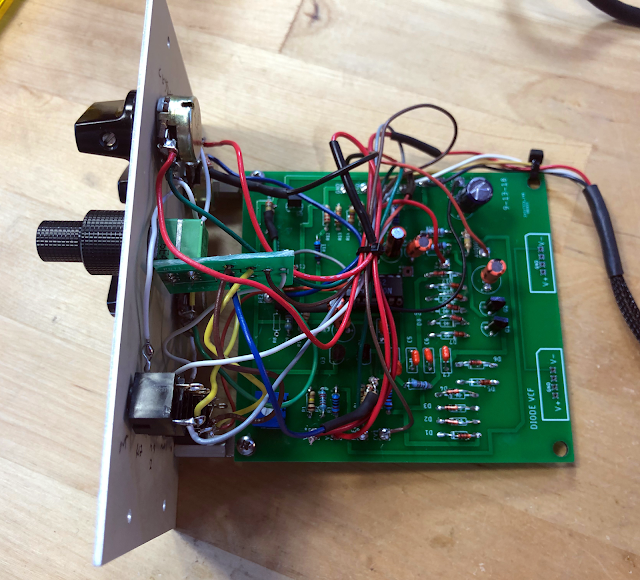 Now 15 whatever years later I have never been able to find anyone who knows what happened to EFM or Tom Gamble. I've talked to fellow synth geeks, college electronic music professors, audio electronics mensches, and asked the moderators on DIY forums. Many remember EFM and a few even built Tom's kits, but no one knows where he went.

I am curious: where did Tom study electronics--he knew his way around--did he go to a university or was he self taught?  Did anyone help him with any aspect of his work? Did he really have to wrap up all those kits by himself?

Well, Tom, regardless: thanks! I know the work may have been too much, and we, the nascent audio forum trolls were hard to deal with, but I can say with certainty you did a damn great job on your take of the EMS diode filter. I am happy to report that after 2 evenings sorting out my own trace errors and getting around to putting in the right parts, I got it my redux of your VCF6C working, it's in my rack now and it's sounding good.

About the board: Speaking of crazy, if anyone other than me does build this, you will need a big butt-load o' diodes (this is covered in the aforementioned VCF6c forum capture). Then get out your diode meter and measure each voltage drop across each diode without touching it. You want to match to a thousandth of a volt drop across the diode, so, .6132V matches  .6138 for instance. Put those up in each "horizontal pair" of diodes, which perhaps makes sense if you look at the schematic:


If you don't do this the filter won't sound good; I was sloppy at first and had to pull all the diodes and replace with matched.


There are also 4 .1uF caps between the diodes, get out a capacitance meter and match those too. I bought a bunch of 5% mylar .1uF and matched them to about .5%. Seems to have worked, the filter sounds better after the match. 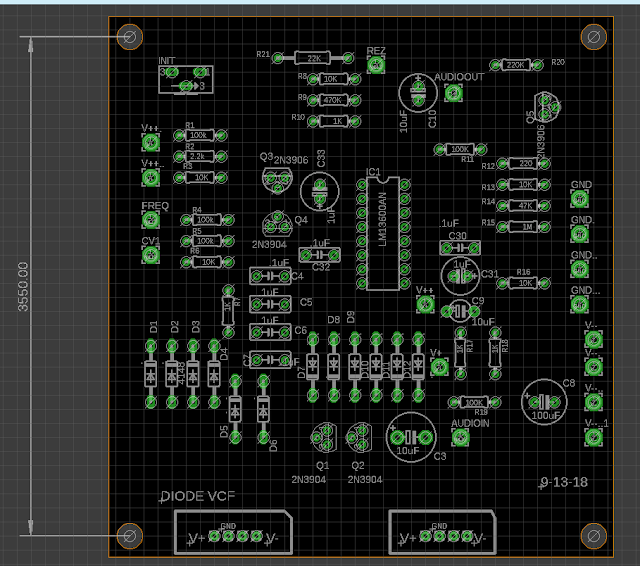 There is one mistake in my PCB (who am I to cast stones eh?) the left side of R8 goes to ground but instead needs to go to -15V.  It took me about an evening to figure that dumb mistake out but once found: easily fixed.....a corrected version is available on my website.

UPDATE 1-22-20: I don't think I included how I wired up the VC rez pot in any of the docs here or on my site.  Might have been omitted from the EFM site as well? It's a 50K linear pot, wired like the PNG you see below.  There are lots of ways to do this; you can just use a pot if you want, so tie 5V to the "top leg" of the pot and omit the jack....but VC rez is a cool feature about Tom's design so here it is. 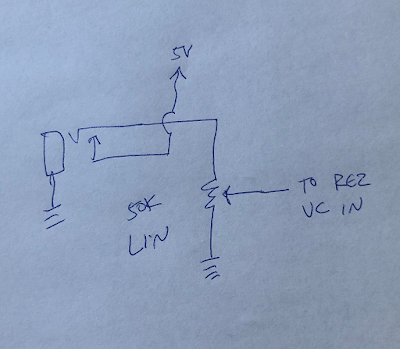 Tom, if you're out there still, reach out to one of us sometime. I don't know about the others, but I feel for you, am grateful for your hard work, and want to know you're doing well.
at March 25, 2019 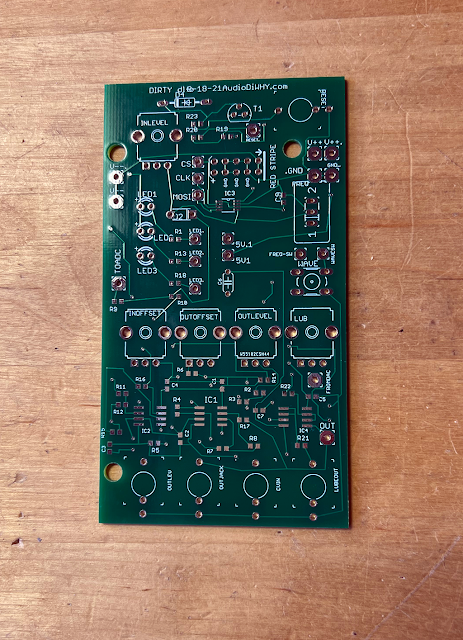