Hello again. I love Youtuber/DIY dude Andreas Speiss--perhaps not enough to propose, but still, I am very fond of him, and try to watch all his videos.

Blame Andreas on this post--because this diWHY quest starts entirely with the video here. Go to about 1:02....In my lab I had all the essential tools mentioned but not a 3D printer. I fully agree with all of A.S.'s other essential tools, so why don't I have a 3D printer?  Um....Because I couldn't really see what I'd use one for.

But then Covid hits, I am bored, and have some time to learn new things. My trip to Spain is cancelled, that money is in my pocket, so I figure why not buy a 3D printer, learn how to use it, and decide what to use it for later.

Lots of research followed and the printer that, as of writing this post, gets the nod as "best for 3D printing newbies" is this one:"Monoprice Voxel 3D:"

SOLD! I paid about $420USD for this, delivered, not super cheap, but from the endless reviews it's a good spend: this printer has a lot of time- and sanity-saving features, many only available on printers that cost a lot more: touch screen, self leveling ability, Ethernet and WiFi,  you get the fresh idear.

It also has a reputation for the default settings producing useful output--and not a puddle of goo. Good. 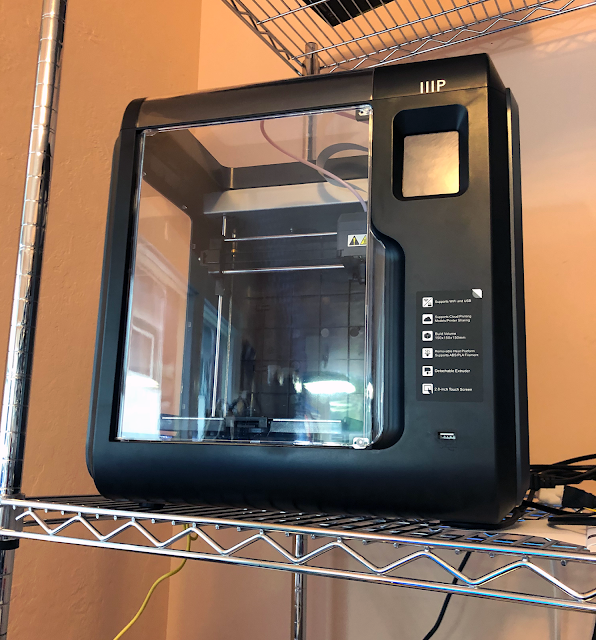 The printer showed up quick, and then, getting it set up was easy; there was a lot more packing material to remove than the quick setup guide showed, but, that's OK. Using the same quick start guide, it was easy to load up PLA filament, heat up the nozzle, and print out the sample cube--which came preloaded in the printer's memory--call up this test object using the touch screen panel and tell it to print.

Righto.....and here is what I got first time around for my cube: 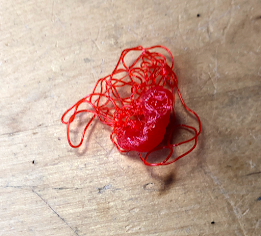 Rats! This is supposed to be the easiest, most idiot-proof 3D printer around and I can't even print a cube. What now?  I figured I'd better read the manual, since the quick start guide might be a bit too quick.

The manual can be downloaded here, and says I needed to calibrate the print nozzle first before printing (not mentioned in the quick guide!)  Did that and I ended up getting what is below, on the right: 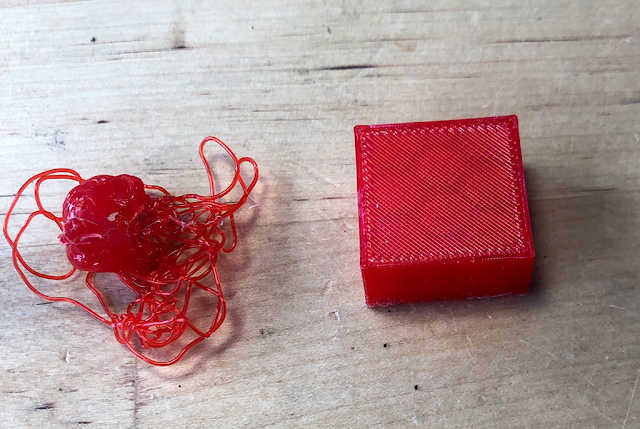 Success! I joyfully sent this pix around to my family as well as my psychiatrist girlfriend, who seemed happy for my victory but puzzled and maybe even a tiny bit concerned.
OK now that I can print the sample it's time to draw up something right? What 3D CAD software to use? I have messed around with extruding things using Photoshop, but not real 3D CAD. There are many choices for this--and I had to learn one. Tinkercad is popular--but since I have long owned Eagle CAD, I get a free license for Fusion 360, which seemed like a heck of a deal. (Whack! Take that, all you guys at the geek meetups telling me to switch to Kicad! )
I downloaded Fusion 360 months ago and started to mess with it but it made zero sense. Maybe time to try again?
As always--YouTube to the rescue. I found a most-excellent tutorial here.  Parts I II and III took me through the basics, and after I was done with the 3 vids I could conjure up simple shapes and get them realized in 3D: 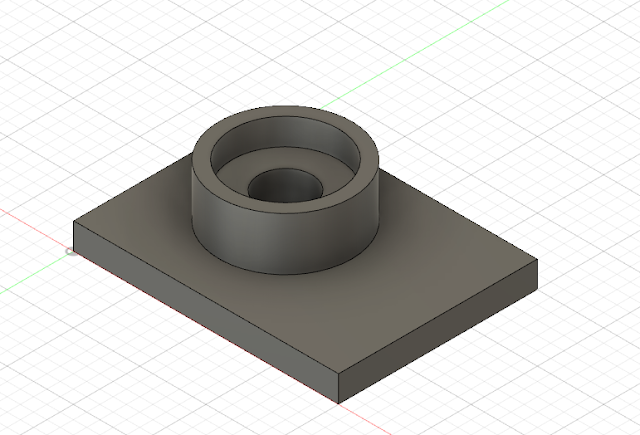 Time to print: Turns out you need a "slicer" to turn the 3D output (".stl") into a digital format almost all 3D printers eat ("gcode").  The program almost everyone uses for doing this conversion--it's free--is called CURA. I downloaded that and turned the stl into gcode and guess what? The Voxel didn't accept the gcode file I presented to it!
Went through the manual again--nothing. Why won't gcode--or even stl, which supposedly the printer can read--work?
I went through a bunch of reddit forums and other stuff--nothing.
I finally found the answer in the video here: The Monoprice Voxel 3D doesn't use gcode, it uses something else; so to make the voxel work you have to use the FlashPrint slicer on the Monoprice website (here--go to the bottom of the page--very bottom--the section that says "Support Files").
Furthermore, Cura has no way I could find to talk to the Voxel 3D printer using Ethernet--i.e., there are no details about a "print" command from the Cura slicer--but the Voxel FlashPrint slicer does, which solves another poorly documented and critical issue: how I send 3D jobs to the printer using Ethernet.
Indeed, I stumbled around and cursed a lot on this Cura vs. Flashprint conundrum. But, once I found the right slicing software, and got it going on my PC, things got very easy.
Now it's print time. So--Um--really! What am I going to make? Guess it's time to figure that out.
Motorizing the pursuit: If you've been following this blog, I have been working for over a year on a Lunetta synth based on Reverselandfill's most excellent Noise! chaotic oscillator.  I have gone winchester mystery house, coming up with a bunch of boards to modify the lunetta madness. Posts about the Noise! build are here , here, and here (as well as here ). Will it ever get finished? Who knows???
It's time to put all 8 PCBs into a case, so why not 3D up some feet for the project's PCB "stacks"? Here we go: 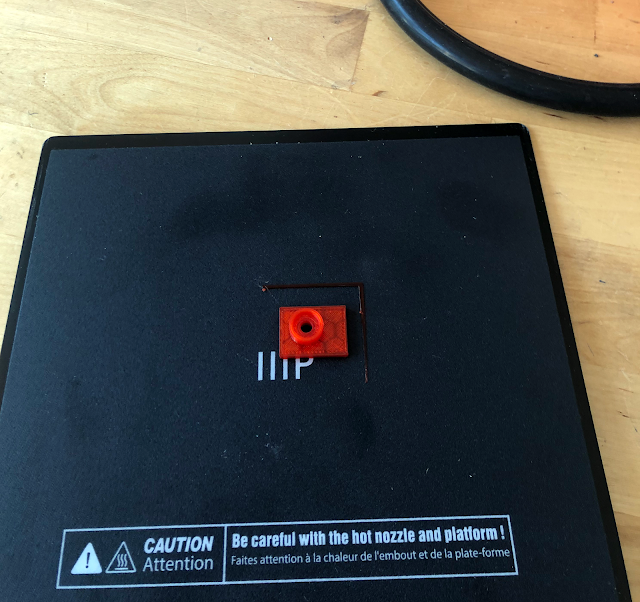 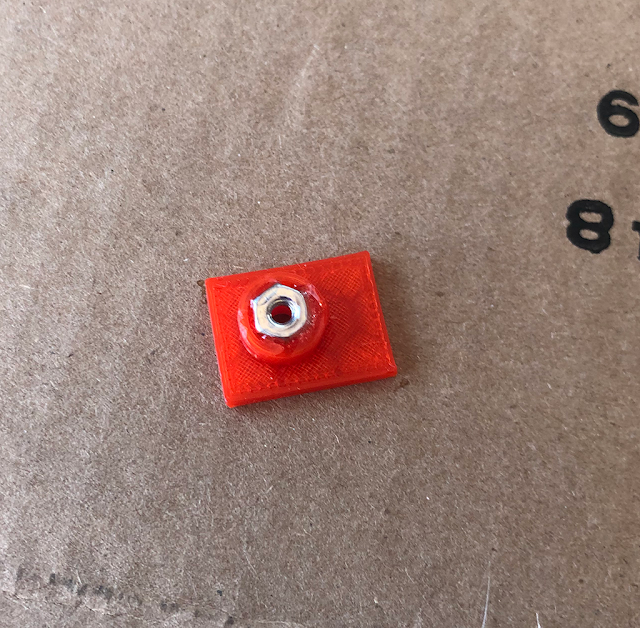 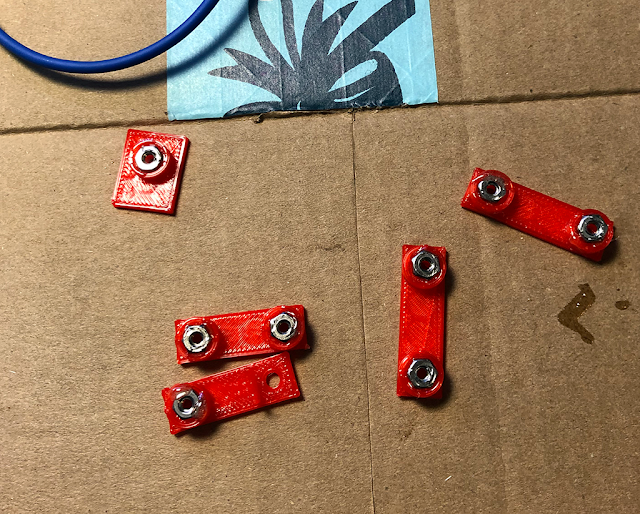 INDEED. I used 5 minute epoxy to glue the 4-40 nuts into the feet. I could have designed 4-40 threads the CAD  design but I didn't know how strong or brittle that would be, and it's good to know that epoxy, metal, and PLA like one another--1001 uses. 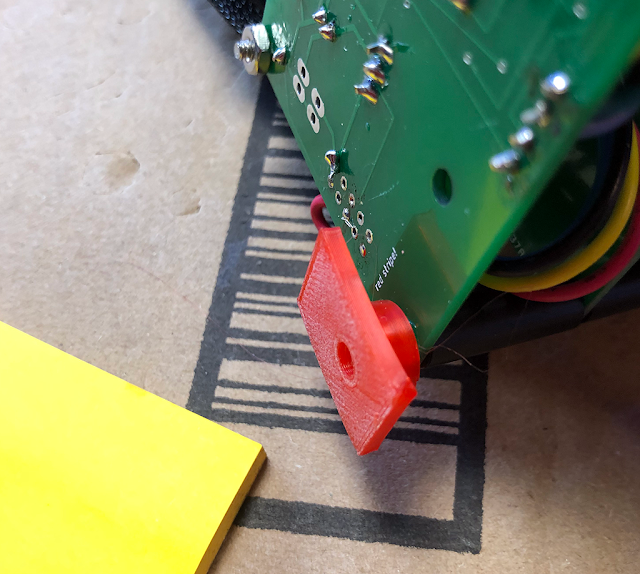 Yep, screws right on. Seems to work! Victory!
Onward! I have decided that perhaps I love 3D printing.....like the Teensy Audio, this acquition will change how I do DIwhY and the (extremely underground) hits keep coming.
Moving on--time to finish the Noise! synth. Next week I hope? Maybe, maybe not.
Time to wrap it up: 3D printing outgasses are supposedly toxic, hopefully less than covid. so as always don't breathe the fumes, but really, you should check out the Voxel if you're thinking of getting into 3D printing--wow, what a gizmo.
at August 10, 2020